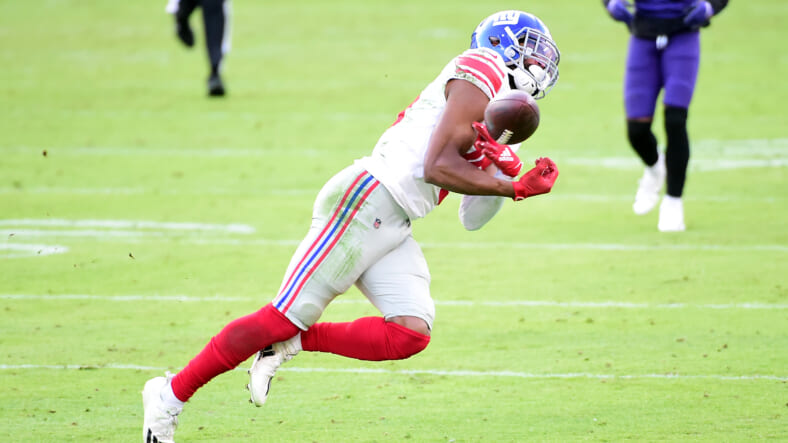 The New York Giants are heading into Week 4 against the New Orleans Saints down a few receivers. With Sterling Shepard and Darius Slayton both suffering hamstring injuries against the Atlanta Falcons last weekend, the Giants will have to roll with a few reserves.

Losing both takes a toll in different ways, as Shepard operates primarily out of the slot and Slayton is Daniel Jonesâ€™s top deep-threat receiver. Most would coin Kenny Golladay as Jones’s top long-range target, but thatâ€™s a conversation for another day and a scheme-related issue, thanks to coordinator Jason Garrett.

Shepard acts as a security blanket in the passing game, with his great route running in the short/intermediate ranges of the field. His most lethal routes include whip and slant concepts. It is unlikely that either will take the field against New Orleans, but letâ€™s take a look at two other receivers who will pick up their share of the workload.

Not looking good for Sunday for any of them.

Two receivers who can pick up the slack for the New York Giants:

Johnson was surprisingly effective against the Falcons, picking up five receptions on seven targets for 51 yards. Johnson is the tallest receiver in the NFL at 6’7″, providing a big target for Jones in the passing game. After being cut by the Jacksonville Jaguars, the Giants scooped him up as a reserve option, and he showed off his talents early in Week 3.

Considering how many times Jones targeted him in the passing game, I expect him to enjoy a fruitful number of reps against the Saints, even if the Giants do call up a reserve option like Dante Pettis.

Getting Kadarius Toney more involved is a necessity for Garrett, who has seldom used the 20th overall pick from the 2021 NFL draft this year. Toney recorded two catches last week against Atlanta, picking up 16 yards. He showed off his quick movements and agility with the ball in his hands, so designing a few creative plays around him would be ideal if the Giants want to get him involved. Toney is still working his way up as a route runner and receiver, but getting him into space is all the Giants need to do to maximize his talents.