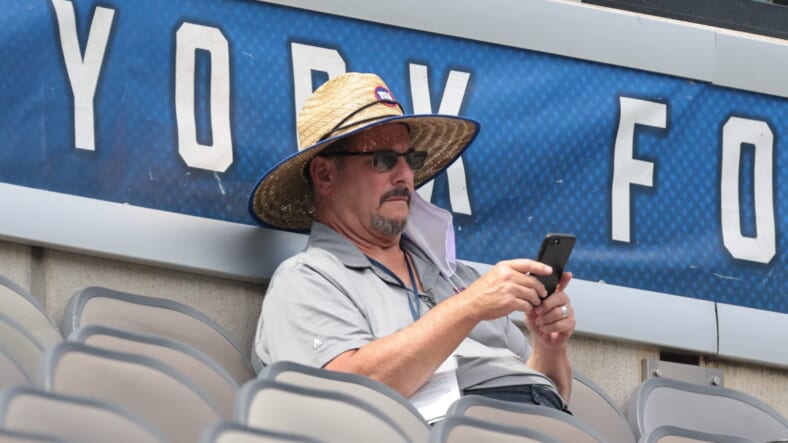 If youâ€™ve been following along with the Aaron Rodgers and Green Bay saga, you know that it took an interesting twist on Monday afternoon. Reportedly, Rodgers curated a list of teams he’d be willing to play for, and the New York Giants were surprisingly on the supposed list. While Rodgers has yet to confirm this is even true, letâ€™s roll with this ridiculous rumor for the sake of the off-season.

Does this make any sense for the Giants? Absolutely not. While adding Rodgers would give them the potential to be a top 10 defense immediately, he would count $22.85 million against the cap. The Giants simply donâ€™t have that much money available, even if they parted ways with Daniel Jones, due to his guaranteed money on his rookie contract. They would have to cut a variety of players, giving up money during the 2021 season just to fit Rodgers under their salary cap.

Is there any way the New York Giants could figure out the money?

Alternatively, they could ask Rodgers to tear up his contract and offer him an entirely new deal that would backload the money a few seasons. That would be the only way they can operate strategically, but Rodgers is currently 37 years old and not getting any younger, so his quality of play eventually will begin to deteriorate.

Even if he takes a step backward in his production, he still managed 48 touchdowns last season, a career-high that landed him on the All-Pro First Team. Thereâ€™s no question that whatever offense he is on is immediately a contender, and the Giants arguably have more weapons on their unit than the Green Bay Packers.

Having recently acquired in Kadarius Toney in the 2021 NFL draft, the Giants are also expecting Saquon Barkley to return to full health this upcoming season, with the addition of Kenny Golladay as their WR1.

Rodgers would have himself a field day with the weapons the Giants currently possess, but again, the contract numbers simply donâ€™t match up. Nonetheless, general manager Dave Gettleman stated that the Rodgers debacle was none of his business but then followed up on WFAN on Monday afternoon, stating, â€œyou explore everything.â€

Dave Gettleman said "you explore everything" in reference to Aaron Rodgers rumored to want out of Green Bay.

Take that as you will lol

Whether Gettleman loves to mess with the media or the fan base, he certainly stirred a ruckus on social media. While expecting anything to come from this rumor is optimistic and maybe even foolish, the Giants are clearly dedicated to Daniel Jones and his development, as their off-season would attest.

Theyâ€™re hoping for a Josh Allen-like developmental jump this upcoming year, and after spending $70 million on Golliday and a first-round pick on another playmaker, Jones will have plenty of talent to utilize on offense.