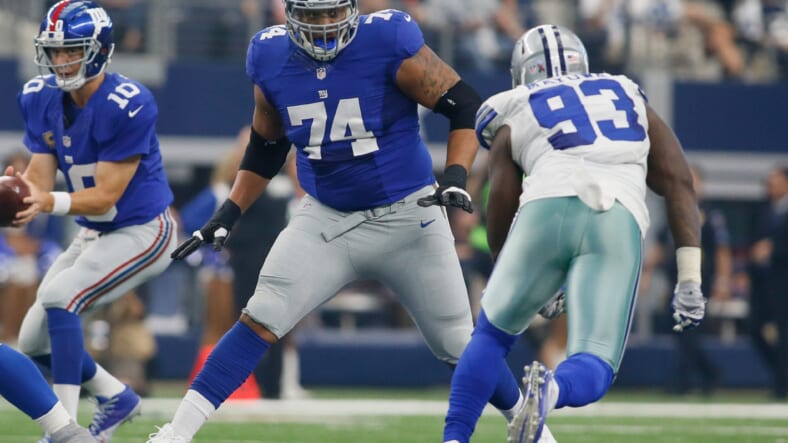 If you’ve seen the New York Giants play a game in the past three years, you’ve also likely witnessed the extreme talents of tackle Ereck Flowers. The Giants’ first-round draft pick back in 2015 has managed to stick with the team despite being a human turnstile on Eli Manning’s blind side, and now, he’s on the right side of the line.

In week 1 of the regular season, Flowers reverted back to his normal self – the epitome of a bust. If you aren’t sold on his inadequacies yet, just wait for this. On the very first play of the game against the Jaguars, Flowers was beat so bad that he attempted to trip his assignment. Tack on a 15 yard penalty for tripping and the Giants are once again in a hole.

What came after the New York Giants’ loss to the Jacksonville Jaguars?

After the disastrous performance, the entire offensive line spent time fielding questions and facing their issues. Flowers, did not. He ran away from the criticism. Same old Mr. Tulip…

“I donâ€™t really care what a lot of people have to say about this and that,” Flowers said to Giants reporters on Monday. “I care about what my coach says and the people next to me and thatâ€™s all I really care about. If he feels like Iâ€™m wrong on that play then, yes, Iâ€™ll take that, okay coach youâ€™re right. But if somebody else whoâ€™s not really in the room, doesnâ€™t know the play, doesnâ€™t know what weâ€™re doing, doesnâ€™t matter to me.”

Great, Flowers is capable of agreeing with his coach, now why is it that he can’t learn from him? Why’s it that Flowers has managed zero developmental success after “years” of bad play? It makes no logical sense.

A couple of snaps that he’d like to have back? He committed two penalties within the first three plays of the game! There’s no having plays back in the NFL…you have a job to do, so do it!

â€œHe had the tripping penalty and then on the hold, and that happens frequently, the quarterback scrambled, which was good, and unfortunately thereâ€™s times when those holds occur. That was the gist of it the first drive.â€

Kudos to Shurmur for having Flowers’ back after Sunday. Any professional will tell you that the four-year veteran has fundamental issues beyond belief, and shifting to right tackle isn’t going to magically fix them. The only benefit will be that Eli can see the 270 pound monster defensive end running straight for him.

Flowers finished the loss with 7 total pressures allowed (5 hurries, 1 QB hit, and 1 sack). This was the third-most pressures out of any starting tackle in week 1, according to PFF. The worst part is, Flowers has no competition behind him. The only alternative option is Chad Wheeler, and Shurmur seems very reluctant to hand him a starting gig. How terrifying is that?