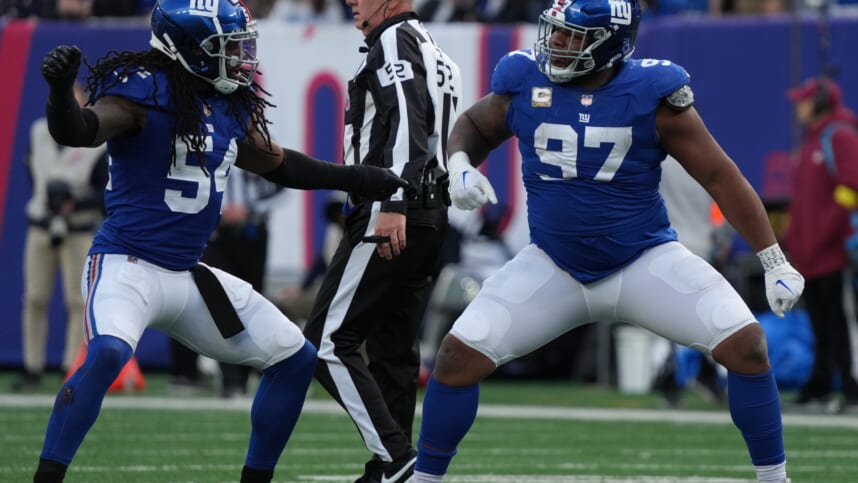 New York Giants defensive lineman Dexter Lawrence is dominating anyone in his way this season. The 2019 first-round pick has come into his own this year, experiencing a breakout campaign like no other. Lawrence was always considered a capable run defender and a decent pass-rusher, but this season, he has elevated his game to new heights in both facets of defense. Dexter Lawrence has become a staple in the middle of the Giants’ defense in 2022.

Dexter Lawrence dominating in the middle of the Giants’ defense

The New York Giants picked up another win this Sunday, improving their record to 7-2 against the Houston Texans. Once again, the defense came up big, holding the opposing offense to just 16 points. A big part of the defense’s success was the interior linemen. Leonard Williams and Dexter Lawrence combined to create a wrecking ball in the middle of Big Blue’s defense, as they have all season long.

Everything starts up front, whether it’s the defensive line or the offensive line. And Dexter and Leo, along with some other guys that have been playing in there, have been doing a good job for us. We’re going to continue to need that.

Dexter Lawrence was a terror in Week 10. Big Dexy made PFF’s Week 10 Team of the Week with his dominant performance against Houston. Pro Football Focus credited Dexter Lawrence with an insane stat sheet, totaling him nine quarterback pressures and two sacks in Week 10.

Lawrence is a wrecking ball this season. He set a new single-game record for total pressures by a defender over 320 pounds with nine pressures — two sacks, four quarterback hits and three hurries. He beat his blocker on three more snaps, as well, in Sunday’s win over the Texans.

Each year, my goal is to grow in my position, learn in my position, and this year everything is kind of slowing down for me, it’s making sense. I’m continuing to build my confidence throughout the whole week and preparing the right way and it’s just showing. I just want to keep going and keep trying to stack wins and get other guys to keep going with me.

The New York Giants are winning games on the back of their stout defense. Dexter Lawrence has been a game-changer this year, emerging as a legitimate All-Pro talent. At 7-2, Big Blue is looking to make its first postseason appearance since 2016 this year. With Lawrence continuing to dominate and disrupt opposing offenses, the Giants can feel confident in their defensive talent heading into the home stretch of the regular season.

It’s just the respect I’m earning from [Kayvon Thibodeaux]. [Aaron Donald is] a good ball player and I don’t like comparing myself to people and things like that, but that’s how [Kayvon] views me, and I just want to keep dominating and keep proving myself to him and to whoever else.