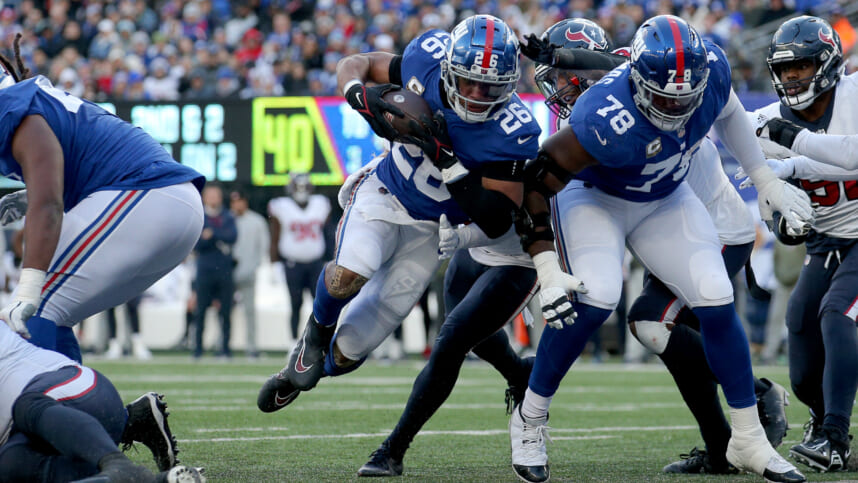 The New York Giants won their seventh game of the season today with a gritty 24-16 victory over the Houston Texans in Week 10. The Giants improved their record to 7-2 with this victory, coming out of their bye week looking refreshed and ready to tackle the second half of the season. This is the best start to the season that the New York Giants have enjoyed since 2008.

Main takeaways from the Giants’ win over the Texans

After a sloppy first half, Brian Daboll and his staff made the adjustments necessary to secure the win after halftime. Big Blue played with the lead all game long after Daniel Jones marched the offense down for a touchdown on their opening possession. Jones stood out today, playing a winning brand of football from the quarterback position. It was a run-heavy approach from the Giants’ offense as Daniel Jones only attempted 17 passes. He completed 13 of the attempts, though, totaling an impressive 197 yards, 2 touchdowns, and an excellent 153.3 quarterback rating.

Saquon Barkley carried the New York Giants’ offense to victory today. Mike Kafka designed a game plan that ran through Barkley. The superstar running back took a career-high 35 carries, totaling 152 rushing yards and 1 touchdown. Barkley also added one reception for 8 yards out of the backfield. The Giants ran the ball a total of 47 times in this week’s matchup, totaling 191 yards on the ground. Mike Kafka dialed up an offensive gameplan reliant on the rushing attack, propelling the Giants to victory against Houston.

Darius Slayton was the Giants’ leading receiver today. Big Play Slay hauled in 3 receptions for 95 yards and 1 touchdown, an exhilarating 54-yard catch and run to extend the Giants’ lead.

Darius Slayton picked up the slack with Kenny Golladay continuing to disappoint. The Giants’ $72 million receiver dropped two passes in the first half before ultimately being benched for the rest of the game.

When asked why things have not worked out this season, Kenny Golladay was not able to come up with much of an answer, saying “I don’t know.”

On the defensive side of the ball, Wink Martindale once again put together a spectacular game plan to hold the Texans off and secure the win. The Giants forced two turnovers out of the Texans’ offense, one fumble forced by Leonard Williams, and one interception hauled in by rookie safety Dane Belton. Dane Belton saw increased playing time today with starting safety Xavier McKinney out of the lineup.

Another well-rounded performance by the New York Giants led them to a victory. Big Blue’s 7-2 record keeps them near the top of the league’s standings and firmly in the playoff hunt. Next week, the Giants will be home to take on the 3-6 Detroit Lions.