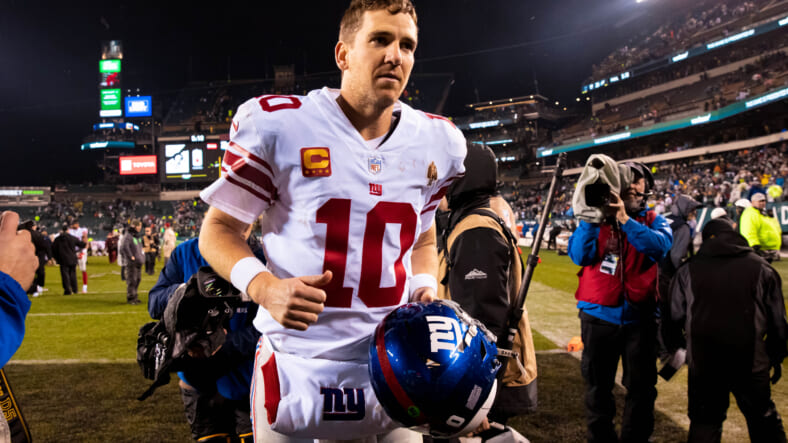 Eli Manning took the podium at the field house at the Quest Diagnostics Training Center on Friday looking very much like the guy who Ernie Accorsi traded for 16 years ago. His attitude is the same as well. He is still humble, grateful and classy and in his farewell speech to the many of friends, family, teammates in attendance at his retirement press conference, he acknowledged that gratitude in front of a large gathering.

CEO John Mara opened the festivities by delivering an emotional account of how just about all of Giant Nation was feeling at that moment.

We have this game ball to present to you, which attempts to list all of your accomplishments, I’m not sure we got them all in there, but you will always be the ultimate Giant, and we would be honored to induct you into our Ring of Honor next season. And please know this, no Giant will ever wear No. 10 again.”

Here’s the final half of what Eli said in his address on Friday:

“I don’t have a single regret and ultimately, I think that it worked out for you and for me. We supported our community in the past, today, and since we’re going to be sticking around here, we’ll continue to support this community in the future.

It’s rare to have the privilege of playing an entire career with one organization. I’m proud to be one of the few, but even more so, that it was as a Giant. There are a few people that I want to thank.

Of course, the Mara and the Tisch family. You can be confident that no one has loved and appreciated wearing the Giants uniform more than I have and that will never change.

To Ernie Accorsi, 16 years ago, Ernie made the trade that made me a Giant for life. Thank you so much.

To Coach Tom Coughlin, thanks for teaching me the work ethic, the discipline and the value of team-above-all-else mentality.

To Coach Kevin Gilbride, thanks for always having my back and trusting me and supporting me through my entire career.

And of course, to all my teammates. If I named them all, it would take forever and no one would recognize me if I did.

What I will say is that the best thing about playing all these years, is the number of teammates that I can call real friends, and of all those friends, I’m lucky enough to have a few that have become as close as brothers.

And of course, my family. I don’t think I need to make public comments for my family to know how I think about them, but Abby, and to Ava and Lucy and Caroline and Charlie, you are my rock.

And to the Giants fans, you are definitely unique, but I love you for that. I’m walking away today feeling like a New Yorker. Well, at least a Northeasterner and that says a lot about a guy from New Orleans who went to Ole Miss.

Since I’ve only been here, I’m biased when I say that the New York Giants are the greatest organization in the NFL and how they treat players, coaches and personnel. The team’s driving commitment: to win football games. It’s a rarity, but here, “Team” always comes first.

It’s been an honor to be a part of this family and I hope that I’ve represented the organization in the way that you wanted me to from my first day to my last.

For most of my life, people have called me Easy. Believe me, this is nothing easy about today.

Wellington Mara always said, “Once a Giant, Always a Giant.” For me, it’s â€˜Only a Giant.â€™

Manning does not know what his next act id going to be. He was asked if he will take Mara up on his offer to work within the organization in some capacity.

“I think that would be something I would be interested in. I’ve just got to, you know, have to discuss that and talk to Mr. Mara and see in what ways, and I’ve got to think about in what way,” he said. “I think, you know, again, I’ll take some time and just figure out, you know, how I want to spend these next years. But this organization, as I said, so many close friends within the organization, and not just the former teammates, but people in all departments of the organization. The faces, they don’t change. People don’t leave here because of all the wonderful people and the way the organization is run, and they take care of the people here. You do have so many great people that I’d love to be around and be around the people that I call my friends.”