Did the New York Giants land a special talent in UDFA Binjimen Victor? 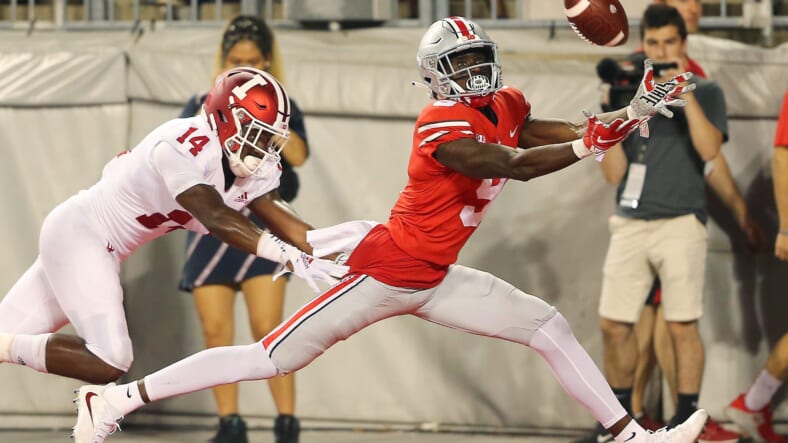 What should we expect from New York Giants UDFA Binjimen Victor?

Every New York Giants fan is always wondering, when are they going to find the next victor Cruz in the undrafted free agent market? Well, the likelihood of that happening is very low, but the Giants did land several high-upside players this off-season. Immediately following the 2020 NFL draft, the Giants went out and signed two Ohio State Buckeye wide receivers: Binjimen Victor and Austin Mack.

Victor, who didnâ€™t start a single game for the Buckeyes over his first three seasons with the squad, finally saw an increase in production and reps in 2019. While he wasnâ€™t the focal point of the offense, he did post 573 yards and six touchdowns over 12 games. When looking at Victor, you might think of a thin Plaxico Burress or AJ Green. However, his ball skills are far from those two legendary wide-outs, but he has the potential to develop into a valuable player for Big Blue.

At 6-foot-4 and 198 pounds, Victor is a long and lanky pass catcher, capable of making contested catches and acting as a solid red-zone threat. The expectation is that he will gain a bit more muscle and have the strength to hand fight with cornerbacks at the line of scrimmage. He can be a little bit week off his break and get pushed around early on in routes, but once he gets into the curve of his route, his long arms give him the ability to make impressive snags.

Currently, I view him as more of a vertical thread that can glide into slants well. Daniel Jones will find his wingspan to be effective, and I believe he can be a back-end wide receiver for the Giants moving forward. I donâ€™t expect him to develop into a starter anytime soon, but supplementing positions affected by injury could be his reality in 2020. Nonetheless, he is one of the more high-upside undrafted free agents signed and could compete for an active roster spot. He certainly has the size and athletic ability to do so.