Could the New York Giants Replace Nate Solder with Star Georgia Tackle In 2020? 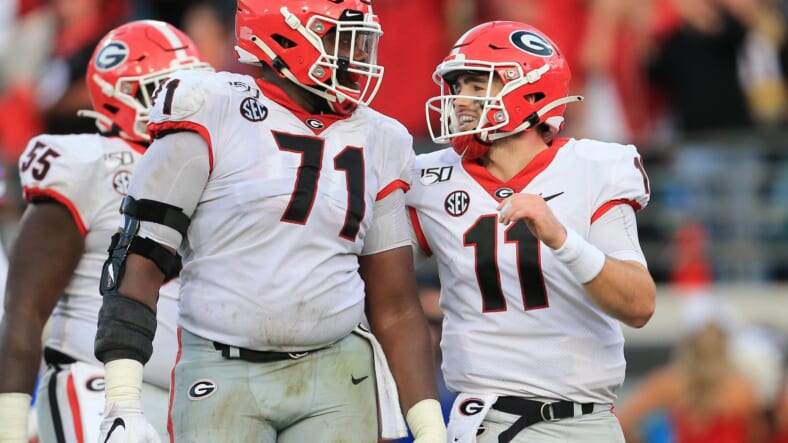 TheÂ New York GiantsÂ won their Week 16 matchup against the Washington Redskins. It was a thrilling, overtime victory. The game was touted as the “Chase Young Bowl.” According to The Draft Network and many Giants fans, theÂ Giants made the most costly win of 2019Â on Sunday.

NFL teams do not play to lose games. They are always playing to win because that is their job. But there had to be a part of most Giants fans that was secretly hoping their team would lose. Losing would have secured the second overall pick in the 2020 NFL Draft for the Gmen.

Instead, the second overall pick now belongs to the division-rival Washington Redskins. The Giants now own the fourth pick in the draft. With one week left in the 2019 NFL season, it does not seem likely that New York will reposition itself in the top three picks. This win effectively takes them out of the Chase Young sweepstakes.

Giants fans are beginning to shift their focus to other draft prospects. Clemson linebacker Isaiah Simmons is an intriguing prospect to keep an eye on. But on the offensive side of the ball, it is a rich draft class at a position that the Giants need: offensive tackle. And the best offensive tackle in this year’s draft isÂ Andrew Thomas.

The New York Giants paid Nate Solder a record-breaking contract in the 2018 offseason. So far, they have not gotten what they paid for. Additionally, Solder is now 32 years old. There is no better time to find the left tackle of the future to solidify the offensive line and protect Daniel Jones’s blindside for a decade than this year’s draft.

There are plenty of second and third-round options that could be starting offensive tackles in this year’s draft. But there is one first-round prospect that stands out from the rest. Andrew Thomas, Georgia’s left tackle, has been incredibly consistent and efficient throughout his entire collegiate career.

Coming in at 6 feet 5 inches, 320 pounds, this hog molly is the perfect guy to anchor an offensive line. Andrew Thomas is a big boy, but he is surprisingly nimble for his size.Â Trevor Sikkema of The Draft NetworkÂ had this to say about the draft’s top offensive tackle: “He has light feet but can anchor in an instant. He has the athleticism to block to the outside and redirection defensive to seal gaps. And he has the power to handle all kinds of bullrushes.”

Andrew ThomasÂ was a three-year starter for Georgia. He played in a pro scheme in college and has plenty of experience against fierce competition in a pro scheme to benefit from. An offensive tackle like Thomas is precisely what the Giants need to give Daniel Jones to help him develop. Andrew Thomas allowed onlyÂ 9 pressuresÂ in 2019. If the Giants decide to go offensive tackle with their top-five pick in 2020, Andrew Thomas would be a home-run selection.