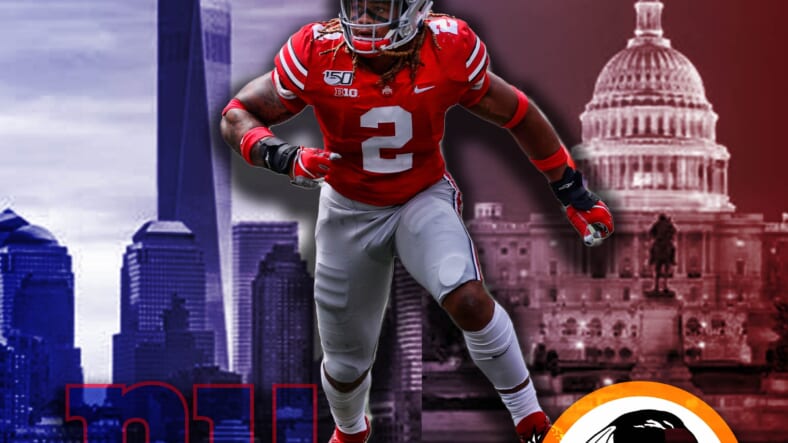 TheÂ New York GiantsÂ are tied for last in the NFC East with a 3-11 record. The Giants are tied with the Washington Redskins. New York alsoÂ currently owns the second overall pickÂ in the 2020 NFL Draft, despite having the same record as Washington and Miami.

The Giants played the Miami Dolphins last week and gained their third victory of the season and tying the two teams’ records. Despite this, the New York Giants still own the second overall pick in the draft because they have the weakest strength of schedule. But this week, the Giants have another key matchup with significant draft implications.

The Giants vs. Redskins Tank Bowl

The Giants and Redskins face off this week in an ultimate tank bowl. The team that loses will more than likely end up with the higher draft pick in April. If the Giants beat the Redskins in Week 16, then Washington’s record will be worse than New York’s, giving them ownership of the second overall pick. If the Giants lose, they all but cement themselves as the owner of the second overall pick.

The loser of this game is the long-term winner in the draft sweepstakes for the Ohio State edge rusher Chase Young. Chase Young is an electrifying player and 2020’s top draft prospect. Whoever ends up losing this game will get the first chance to draft Ohio State’s next NFL superstar. Of course, the team with the second overall pick could pass on Chase Young for a different position of need, but since both Washington and New York need a pass-rusher, it is hard to imagine either of these teams passing up on the draft’s best player.

Chase Young: The Best Player In The Draft

Chase Young will be one of those elite prospects that meet a position of need for either one of these teams. Through 11 games in his 2019 junior season, Chase Young has been aÂ record-breaker. He has totaled 16.5 sacks, setting a new single-season sack record for Ohio State University.

Chase Young gets in the backfield at an insanely high frequency. He has been the most consistent down-to-down pass-rusher in the country and was a Heisman Finalist. According toÂ Pro Football Focus, Chase Young recorded 51 pressures with a 27.6% pass-rush win rate (1st in the nation) and an 18.8% pressure rate. Young has also forced 7 fumbles and defended 3 passes. His 96.7 overallÂ Pro Football FocusÂ grade is one of the highest grades they have ever given.

There will be a higher number of Giants fans cheering for a loss this week than usual. This week’s matchup has significant draft implications, and they all revolve around Chase Young. If he does declare for the draft (which he is expected to, despite him stating otherwise), then he will be the dream pick for either of these teams. Chase Young could be the player to turn a team around. So, to those fans that refuse to cheer for a loss, do not judge those who do so this week. It is all in hopes of landing a franchise-changing player.