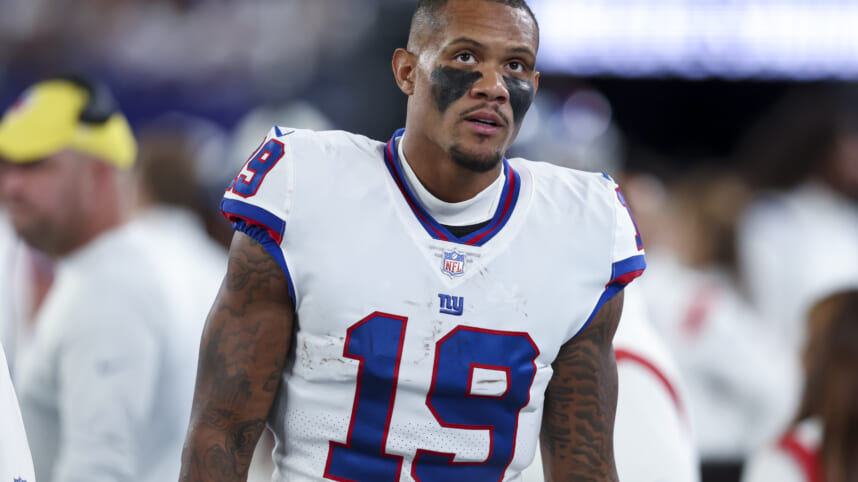 Kenny Golladay has been a massive disappointment for the New York Giants this season. After a shaky 2021 campaign, many believed a big bounce-back year was in store for the seventy-two-million-dollar man. Instead, the Giants have gotten more of the same from KennyG as he has posted two receptions for 22 yards, playing in only four of New York’s eight games this season.

Golladay has been sidelined for the last four weeks with a knee injury. However, head coach Brian Daboll said that Kenny Golladay “should be ready to go” coming out of this week’s bye. With nine games left on the schedule, the 6-2 Giants will need to get the best of Kenny Golladay if they want to push their way to their first playoff appearance since 2016.

According to New York Giants offensive coordinator Mike Kafka, Kenny Golladay has “worked his tail off to get ready for this week” as the Giants prepare to face the Houston Texans (via Dan Salomone). Golladay said today that he is “pushing towards” a return this Sunday and that he feels “pretty good” coming out of the bye week (via Jordan Raanan).

Kenny Golladay was listed as a “limited” participant on today’s practice report. All signs point to Golladay’s return to the field coming this week, though, as the Giants look to beat the Texans this Sunday.

It is hard to gauge how much of an impact Golladay will have on the Giants’ offense. He received only six targets in the four games he played last season and was completely phased out of the Giants’ offense in Week 2. The 29-year-old receiver was signed to a massive contract to be the team’s primary receiving target last offseason. But Golladay has come nowhere close to WR1 status since his tenure with Big Blue began.

In 18 career games with the New York Giants (14 in 2021 and 4 in 2022), Kenny Golladay has totaled only 39 receptions on 82 targets for 543 yards and 0 touchdowns. The Giants have been unable to get the best out of Kenny Golladay, a wide receiver who once led the NFL in receiving touchdowns.

Kenny Golladay was a Pro Bowl receiver in 2019 after totaling 1,190 receiving yards and a league-high 11 receiving touchdowns. This was his second-consecutive season surpassing 1,000 receiving yards. The Giants were hoping to get similar production levels out of Golladay going into this season. Unfortunately, injuries and disappointing performances have gotten in the way.

The Giants are coming out of their Week 9 bye with a tough schedule remaining. At 6-2, the playoffs are well within reach for Big Blue. If Brian Daboll and Mike Kafka are able to finally get the best out of Kenny Golladay, the New York Giants offense should enjoy an exciting second half of the 2022 season.