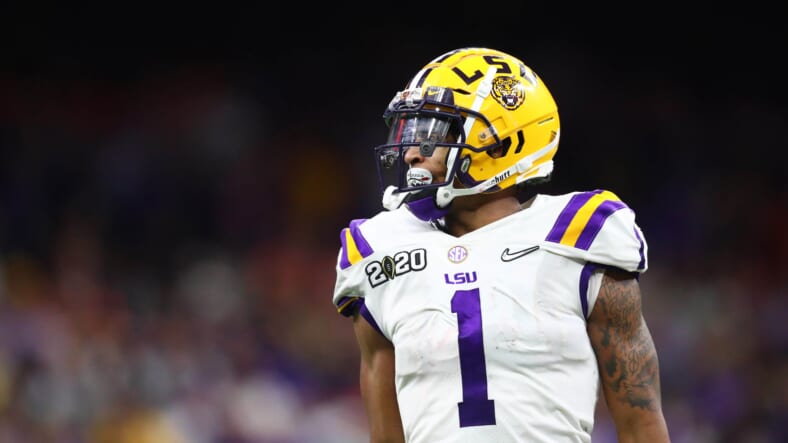 Barring a surge of wins down the stretch, the New York Giants are on track to finish the season with another top-five pick in the 2021 NFL draft. With what would be their fifth top ten selection in the first round since 2015, the Giants are in a great position to draft a special prospect. Here are a few prospects I believe would benefit the Giants greatly in 2021.

If the Giants land a top-three pick, Fields has to be in the conversation. Some have even compared him and Clemson star QB Trevor Lawrence as the “1A and 1B” draft prospects in the upcoming class. So far at Ohio State, he has displayed natural arm talent and elite mobility. With a prep background as a baseball shortstop, I see him as a Kyler Murray level prospect. If the franchise is not sold on Jones and sees this as an opportunity to snag an elite QB prospect, it might be too enticing for the team to pass up on.

Sewell is the prospect I predict as of today is most likely to be taken by the Giants if he is available. An elite blocker in both the passing and rushing game, Sewell is the best available OT prospect in this draft. With a strong upper body and incredible length as a run blocker, pairing him with Andrew Thomas could set the Giants up to have their tackle tandem for the next decade. If the prospects from the 2020 draft like Shane Lemieux and Matt Peart pan out, the team could see a quick upgrade to finally repair the offensive line.

Several questions surround the wide receiver position with the Giants. Will they trade Golden Tate? What will they end up doing with Sterling Shepard? Outside of Darius Slayton, almost everything is up in the air. Not to mention the upcoming wide receiver free-agent class is loaded with names like Kenny Golladay, Keenan Allen, and Allen Robinson. But if the Giants do want to continue the development of Daniel Jones, he’s going to need weapons. He is yet to play with a true number one receiver, and Chase could be just that. Chase set the single-season SEC touchdown record as a true freshman in 2019 and loves to attack open space and is great in contested situations. He is the real deal, and if he is available at the Giants’ selection, he should very much be in consideration.

Many Giant fans, myself included, were clamoring for the team to select Isaiah Simmons fourth overall last year. While I was not disappointed with the Thomas selection, the Giants’ pass-rushing unit has still not improved. I have very much liked what I have seen from Patrick Graham’s unit so far, and giving him a piece like Parsons could bolster this unit tremendously. He showcases the range, pass coverage ability, and pressuring ability to play virtually any role. Getting Xavier McKinney back healthy, Bradberry and Love on the outside, and the front seven stuffing the run as well as they do is all a recipe for what could be a successful defense. Pairing Parsons with Martinez could be a nightmare matchup for opposing offenses.

More to the point of bolstering the pass-rushing unit, Rousseau is another prospect that needs to be in consideration for the Giants. Clean extension ability with hand placement and length, Rousseau would be an instant upgrade to the defensive unit. With the absence of Markus Golden, the team’s best pass rusher, this has to be an area where the team looks to improve in the offseason. The rest of the division already has at least one solidified pass rusher, and if the Giants fail to put pressure on opposing quarterbacks, they don’t stand a chance.