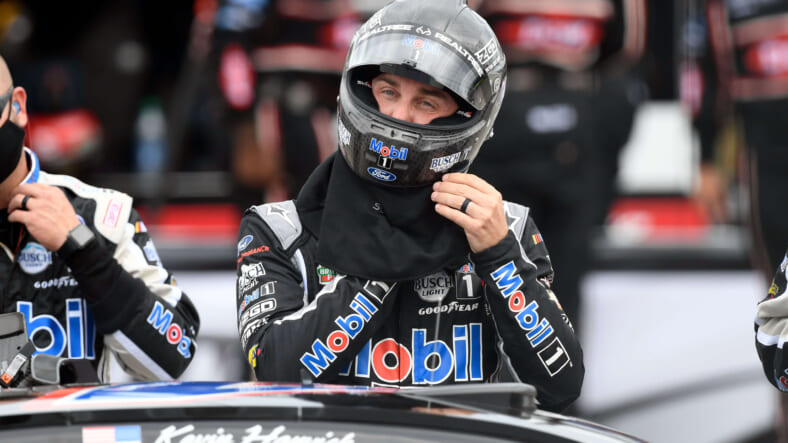 As the cup series prepares to say goodbye to a legend and crown a champion this weekend, ESM’s NASCAR experts are here to break it all down and make their championship picks.

Turn 1: Kevin Harvick had been arguably the most dominant driver this season with 9 wins and a regular-season championship. Does him missing the final four say more about a poor stretch of performances in the round of eight or that the playoff format is flawed?

Nathan Solomon: More than anything, it just has to do with two poor performances. Harvick finished second in Kansas and put himself in good position to advance. However, in the round of eight, you canâ€™t finish outside of the top-15 twice and expect to advance to the championship. The new playoff format was designed to give it a similar feel to a baseball or basketball playoff series. In the MLB, if you have a bad series, you wonâ€™t advance. A team with 110 wins wonâ€™t make it to the World Series if they donâ€™t perform in the series before. That was the case for Harvick in the round of eight, and he, unfortunately, wonâ€™t see himself racing for a championship.

Dylan Price: This is a tough question to analyze for me. I fall somewhere in the middle in regards to this dilemma. With 9 wins, Harvick was dominant for the entirety of the regular season, but he was unable to perform up to the level needed in the round of eight in order to make the final four. See, my issue with Harvick being eliminated is that NASCAR is different than other playoffs like the NBA, MLB, or NFL. Yes, the destinations change each week for the playoffs, barring home-field advantage, but with NASCAR, when you go from track to track, it fundamentally changes your racing style.

I would contribute his elimination to his own rut but would say there could be a case made that the drivers like Harvick, who are in this case the #1 seed, should get more of an advantage because playoff points don’t do enough to reward drivers with 9 wins that much more than those with 2 or 3. Still, Harvick, just like high seeded teams that get beat by lower-seeded teams, did not perform up to the level needed to race for a title this weekend, and that is more about his performance over the last 3 weeks than anything else.

Geoff Magliocchetti: If anything, the NASCAR playoffs are a necessary evil, and there may be little malice in the first place. NASCAR needs to find a way to be different, unique, and competitive in the realm of a busy time on the American sports calendar, and the playoffs are the way to do that. To make a long story short, there’s never going to be a system that satisfies each and every fan. No playoffs leaves the threat of a meaningless season finale (as it was in four of the final five playoff-free seasons). Harvick is far from the first dominant driver to be bamboozled by a playoff system. Current contender Brad Keselowski spoke of the 2014 season when his No. 2 won 6 races but failed to earn the championship invite.

Some changes could probably be made…inviting 16 drivers is a tad much…but the case of Harvick (and Austin Hill in the Truck Series, for that matter) is not a make or break factor. The common complaints that the regular-season champion has no immunity to Phoenix only serve as contradictions. Fans who complain that the playoffs are too gimmick-field or manufactured want a way to manufacture a way for the regular-season champ to make it. The beautiful thing about playoff sports is that they’re unpredictable. Even the undefeated Patriots had to work their way to the Super Bowl…one they lost. Changes can be made, but the playoffs should be here to stay.

Turn 2: This Sunday will be the last time that one of the faces of the sport will race in Jimmie Johnson. With the legacy Johnson has left as a 7-time champion, where does he rank amongst the all-time greats of the sport?

Nathan Solomon: Jimmie Johnson may go down as the greatest NASCAR racer of all time. If he isnâ€™t the greatest of all-time, he will certainly be in the top five. Regardless of the playoff/chase format, heâ€™s won seven championships, and some people donâ€™t realize how hard that is. Heâ€™s won at virtually every track and beaten some of the best in multiple generations of drivers. Iâ€™m excited to see how he runs in Indy Car, and I would love to see him run a few races in NASCAR here and there. I feel he may be the next driver to attempt the Indianapolis 500/Coke 600 doubleheader, and thatâ€™d be really cool to watch. Congrats to Jimmie Johnson on a great career.

Dylan Price:Â I consider myself lucky to have witnessed Jimmie Johnson and his dominance in my lifetime. I was not alive to witness the greatness of guys like Richard Petty and Dale Earnhardt, but one thing is for certain about Jimmie Johnson, he had the IT factor. They say there is a certain aura around the great ones, and I think that was always felt with Johnson. Now, where does he rank amongst the greats is a separate question. I firmly believe that Johnson is one of the best drivers to grace the series, but is he THE best. I think Johnson is up there with Earnhardt and Petty on the Mount Rushmore of the greats of the sport. That fourth spot is firmly up for debate, but I think that the aura around Johnson is still there even though he has not performed at the highest level in the past years and will be for a long time. Congratulations 7-time, you had an incredible career, and I am excited to see what you do in your next endeavors!

Geoff Magliocchetti: Johnson will go down as a clutch performer and the driver of the playoff era. It hurts to see his last dance end like this…with all due respect to Ally Bank, they’re looking like the Wizards Jordan equivalent of NASCAR…but one can’t forget the sheer dominance we saw from Johnson’s No. 48 week in and week out during his prime. Time will tell if Johnson can ever solidify his face on NASCAR’s Mount Rushmore, but his accomplishments should not be forgotten. Congrats on a great career, Jimmie, and best wishes to you and your family.

Turn 3: Well, with exits comes the entrances of new drivers and lineup shakeups. So, which driver in a new ride will see the biggest improvement/make the biggest impact next season?

Nathan Solomon: I think itâ€™ll be rookie Chase Briscoe making a big impact in 2021. Heâ€™s been insanely dominant in the Xfinity Series this year, winning nine times and the championship favorite this weekend. Heâ€™ll be going into a great ride where heâ€™ll have everything he needs to win races right away. I feel that Briscoe will make the playoffs in his first season, pick up a few wins, and even make it as far as the round of eight. Heâ€™s incredibly skilled and knows how to win on every type of racetrack. Expect a big rookie season out of Chase Briscoe in 2021.

Dylan Price: Unlike other analysts, I am excited for a returnee in a new place. I do believe Chase Briscoe and Christopher Bell are going to excel in their new homes, but I am watching for Kyle Larson. People forget, but before Larson was suspended for his egregious comments, he was a budding face of the sport. Larson was in a mid-level situation with Chip Ganassi racing, and I firmly believe with the resources Hendrick Motorsports can provide that Larson will take the #5 machine to a virtual residency in the playoffs and likely to a few trips in victory lane in the coming years.

Geoff Magliocchetti: We’ve seen some big moves this Silly Season, but I’m the most intrigued by Ross Chastain moving to the No. 42 Chip Ganassi Chevrolet. Chastain has never been granted the best equipment but has gone on to have a lucrative career on NASCAR’s lower levels. He’s a driver that earned his keep through on-track endeavors. Frankly, the move to such a big-name Cup ride is well overdue, with Chastain mostly working in low-budget machines. We’ve seen him stick around at places like Daytona and Talladega and run respectably in his lower-tier equipment. With the resources of CGR, Chastain should truly take off.
Turn 4: Lastly, we are down to the final four drivers to decide the championship this Sunday in Phoenix. With Joey Logano, Brad Keselowski, Denny Hamlin, and Chase Elliot battling for the title, who comes out on top?
Nathan Solomon:Â Iâ€™m going to go with Joey Logano winning his second title in three seasons. He won Phoenix in the spring before the coronavirus outbreak and is coming off a win in the round of eight. Two of his championship competitors, Chase Elliott and Brad Keselowski, havenâ€™t won at Phoenix before, although Denny Hamlin has. However, Hamlin is coming off a rough round of eight, and I just donâ€™t see him turning it around. My prediction is that Kevin Harvick will win the race being that heâ€™s been historically dominant at Phoenix, and Joey Logano will take the title, finishing second.Â
Dylan Price: I am a big believer in momentum. Momentum can play more of an impact then things like experience at times, and I think that will show on Sunday. See, where Logano, Keselowski, and Hamlin have experience either winning the big race or being in it for all the marbles, Chase Elliot is the newcomer of the bunch. With 4 wins this year, Elliot has been one of the most consistent racers this year, and I firmly believe he will ride the wave of momentum he had from last Sunday to a championship.
Geoff Magliocchetti: Denny Hamlin gets his first title on Sunday.
King Kevin is gone, and in his wake, the successor is none other than Hamlin. This season has had a bit of an “If not now, when?” feel over in the No. 11 stables. Hamlin has never let off-track issues bother him, but he does appear to be a bit tired of the…well, tired…questions over whether this season is a disappointment without the title at the end. Hamlin has won nearly everything there is to win on a NASCAR Cup Series level, except the titular award at the end. That changes on Sunday in the desert.