What’s next for Merab Dvalishvili after win at UFC 278? 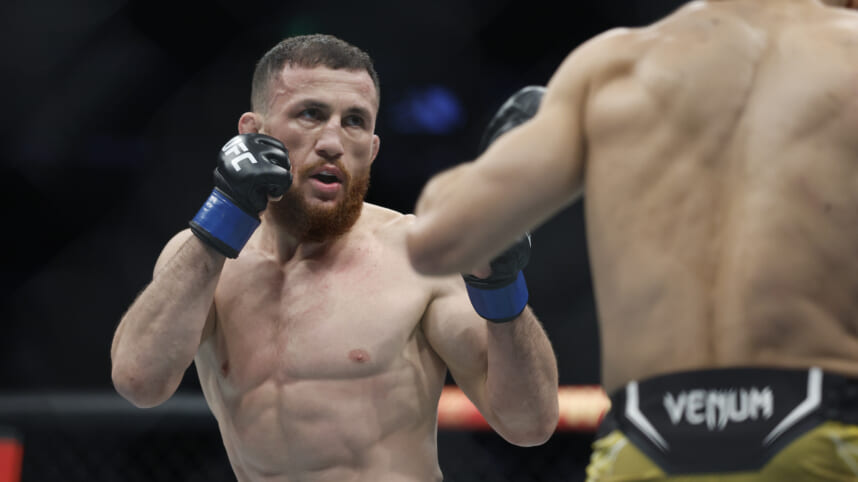 On the main card of UFC 278, we saw a potential title eliminator in the bantamweight division. Former featherweight champion Jose Aldo (31-8) took on the surging Merab Dvalishvili (15-4).

Back in 2017, “The Machine” Merab Dvalishvili earned himself a UFC contract from Dana White after White saw him knock out Raufeon Stots. Dvalishvili looked like he had a ton of potential, but started out rough inside the octagon losing his first two.

However, after those two losses, The Machine won seven straight leading him to this shot against Aldo. For Dvalishvili, the game plan was to keep the pressure high and try to take down Aldo. Aldo is known for his legendary takedown defense and that was on full display Saturday night.

Dvalishvili did his part in trying for takedowns and keeping the pressure high, but he couldn’t get Aldo down. What he could do is control the former featherweight champion and deny him from creating big opportunities in space.

It wasn’t the most thrilling contest in the world, but Dvalishvili did what he had to do. Aldo couldn’t get off any significant offense all night and Dvalishvili grinded his way to a decision win.

With this latest win, Dvalishvili has now won eight straight fights. That winning streak has earned him the third ranking in the bantamweight division. However, there’s one big problem with Dvalishvili moving forward.

Dvalishvili’s main training partner and best friend is the current champion Aljamain Sterling. Joe Rogan asked Dvalishvili about this after the fight and Dvalishvili made it clear that he wouldn’t fight his teammate. So with that in mind, he will never fight for the title as long as Sterling is champion.

At UFC 280, Sterling is defending against TJ Dillashaw. If Dillashaw were to win, there would be an outside chance that Dvalishvili could get a title shot. However, even if TJ wins, I don’t think Dvalishvili is getting a title shot next.

I think more than likely you’ll see him get another fight against a top contender. Perhaps the winner of the Cory Sandhagen – Song Yadong fight or even someone from the Petr Yan – Sean O’Malley fight. Either way, Dvalishvili will get a top contender in his next bout.