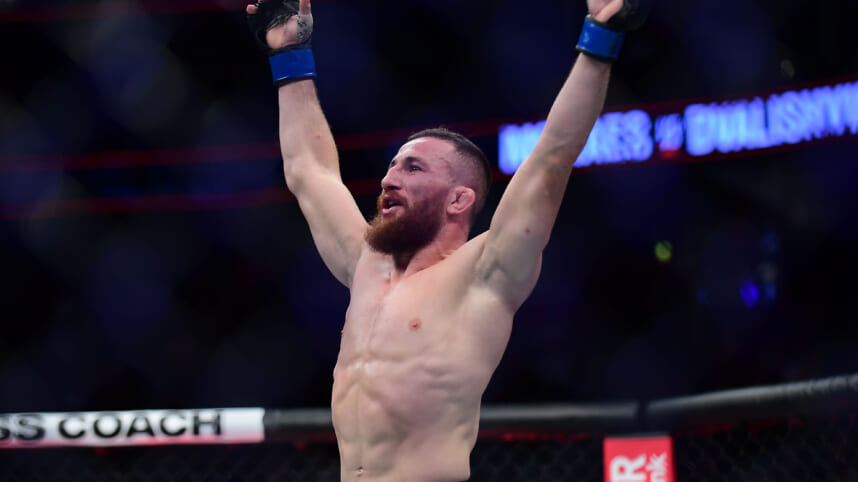 On the main card of UFC 278, we saw a pivotal battle in the bantamweight division. Former featherweight king Jose Aldo (31-7) was looking for another win to secure a title shot at 135 pounds. Standing in his way was Merab Dvalishvili (14-4).

The former featherweight champion was riding a huge wave of momentum entering tonight. Aldo had won three straight against the likes of Chito Vera, Pedro Munhoz, and Rob Font.

Given the layout of the bantamweight division, there’s no question that Aldo would earn a shot with a win. That being said, Merab Dvalishvili wasn’t going to go down without a fight.

Things started out rough for Merab Dvalishvili inside the octagon. He lost back-to-back fights which made Dana White question whether or not he made the right decision to give Dvalishvili a shot after seeing him on Lookin’ for a Fight.

However, Dvalishvili turned things around in a big way. After losing those two bouts, he hasn’t lost since. Dvalishvili had won seven fights in a row leading to tonight.

The UFC 278 bantamweight contest started with a touch of the gloves. Aldo takes the center and starts plotting forward. Dvalishvili light on his feet on the outside and he’s circling here. Spinning back kick attempt from Dvalishvili. Dvalishvili coming forward pawing with his jab.

Knee to the body lands for Aldo. Dvalishvili counters with a low kick. Dvalishvili upping the pressure here. Powerful low kick from Aldo, but his shots are few and far between right now. Another big takedown attempt from Dvalishvili and he has Aldo against the fence.

Aldo defending well here and breaks but eats a big left from Dvalishvili. Big combination lands for Aldo and then he lands a big knee. Right straight just misses for Aldo. Aldo throws big shots as the bell sounds but nothing big lands. Very close first here at UFC 278.

They break and here we go. Pressure now from Aldo and he lands a big combination. Aldo looks like he’s trying to open up more but Dvalishvili goes right back on the takedown attempt. However, once again, Aldo keeps the fight standing.

Loud boos as Dvalishvili goes for another takedown attempt. The round comes to a close and I guess you give the second to Dvalishvili, but who knows how this fight is scored at UFC 278.

Entering the final round at UFC 278 and this can be anyone’s fight. They touch gloves and here we go. Five seconds in and Dvalishvili goes for a takedown. Aldo easily defends but he eats a right hand from Dvalishvili. Combination now from Dvalishvili.

Aldo looks tired here in the third round and Dvalishvili is really upping the pressure. Nice knee to the body for Aldo and then he lands a second. Dvalishvili is all over him with pressure here though. Jab from Aldo lands. Lead left hook lands for the former champion.

They clinch briefly but Aldo pushes Dvalishvili away. Both men trade jabs and Dvalishvili pushes forward with a combination. Aldo is trying to move away here but Dvalishvili is chasing him down. Lots of shots from Dvalishvili but nothing big is landing.

That being said, Aldo is throwing nothing. Left hook lands for Aldo and Dvalishvili goes right back in for a takedown. Dvalishvili is now 0-12 on takedown attempts. Loud boos here with one minute to go in the fight. Dvalishvili is trying so hard for the takedown but nothing so far.