What’s next for Megan Anderson after loss at UFC 259? 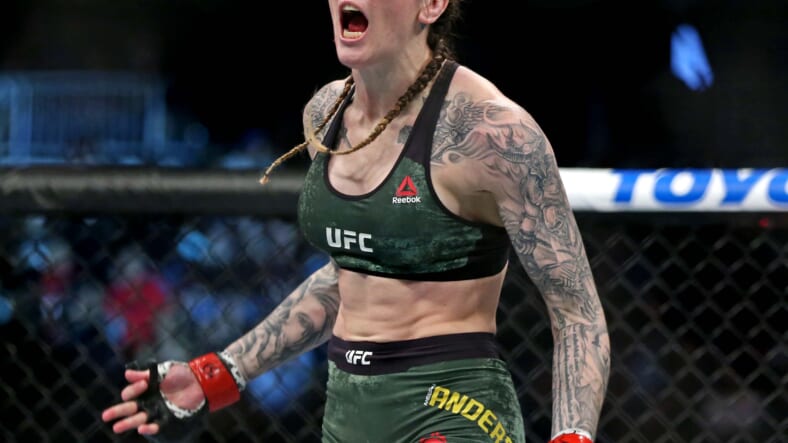 This past Saturday at UFC 259, Megan Anderson (11-5) finally got her shot at the featherweight title. Anderson was originally supposed to get her title fight back in December, however, Amanda Nunes (21-4) had to push back the fight a couple of months.

When the UFC brought Megan Anderson in, many considered her to be a future title contender. Anderson was the Invicta featherweight champion and she had a lot of skills that made her a formattable opponent for anyone at 145 pounds.

Up until Saturday night, Anderson was 3-2 inside the octagon with losses to Holly Holm and Felicia Spencer. However, she was coming off of back-to-back first round stoppages which earned her the shot at the UFC‘s two-division champion.

Anderson had an extremely tall task on Saturday night. Amanda Nunes has looked unstoppable over her last eleven fights. The two-division champion also seems to do her best work at 145 pounds when she doesn’t have to cut extra weight.

Megan Anderson was a massive betting underdog entering UFC 259 and the fight played out that way. Anderson looked extremely nervous and tentative in the cage. As soon as Nunes hit her clean for the first time, you knew she was in trouble.

Anderson retreated and Nunes swarmed. The UFC champion pummeled Anderson with more shots that forced a desperate takedown attempt. Nunes easily defended and locked up a triangle armbar to get the first round submission and retain her title.

Unfortunately for Megan Anderson, there are not a lot of options for her at the moment in the UFC. The women’s featherweight division is extremely shallow and they don’t even have a rankings system due to the lack of fighters.

With that, it’s hard to tell what’s next for Anderson. Dana White’s Contender Series makes it’s return in June and perhaps the UFC will look to add more 145 pound women through the upcoming season. More talent means more options for Megan Anderson.

When it comes to current UFC options, one fighter to look at is Leah Letson (5-1). Letson was a semifinalist on season 28 of The Ultimate Fighter. She hasn’t fought since her 2018 win over Julija Stoliarenko, but she’s gearing up for her return to the octagon.

However, the most likely option would be the winner of the Felicia Spencer – Danyelle Wolf fight. This matchup is expected to take place in May. Whoever wins won’t likely warrant a title shot so a fight with Anderson would make sense. No matter how you slice it, there aren’t a lot of options at featherweight.