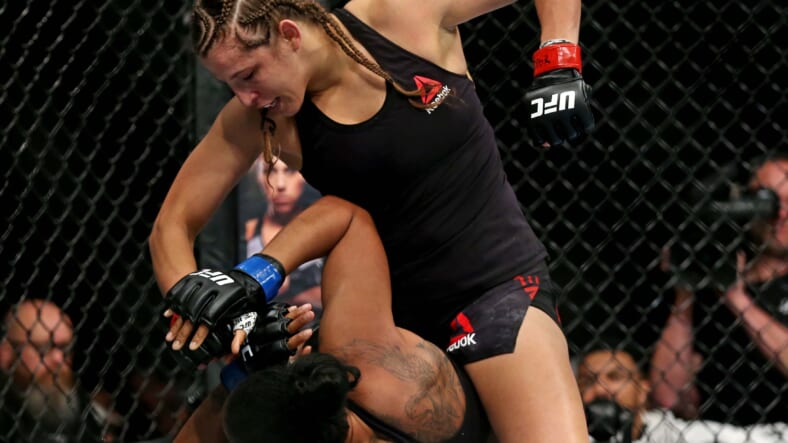 The UFC has finalized a big matchup in their featherweight division for May. First reported by BJPenn.com, Felicia Spencer (8-2) will be returning for her first fight since her failed attempted to dethrone Amanda Nunes at UFC 250.

Standing across from Felicia Spencer will be Danyelle Wolf (1-0) who will be making her UFC debut. The matchup between the two featherweights will take place on May 20th.

As mentioned, this will be the first time that Felicia Spencer has competed since last June. By the time she makes the walk, it would have been almost a year since UFC 250. On that night, Felicia Spencer proved that she just might be the toughest female fighter in the UFC.

The only two women to have defeated Felicia Spencer in her professional career are Amanda Nunes and Cris Cyborg. Not a bad resume when arguably the two greatest female fighters of all time are your only losses.

The former Invicta Featherweight champion is known for her toughness and her grappling ability. Spencer has incredible top pressure when she gets fights to the ground and she’s very strong. She’s still one of the best female fighters in the UFC despite the lopsided loss to Nunes.

Last September, Danyelle Wolf made her professional MMA debut on Dana White’s Contender Series. She won that fight by unanimous decision and the UFC decided to give her a contract. The former pro-boxer will see a massive step up in competition in May.

Wolf is a former US national champion in boxing. She will turn 38 years old this year, but she believes she has what it takes to make a run in the UFC. Due to the featherweight division being extremely light, Wolf was able to get a contract from the UFC after her debut.

She can take full advantage of that in May when she takes on Felicia Spencer. If Wolf is able to come out and defeat Spencer in her UFC debut, she might only be a victory away from a featherweight title shot. That sounds crazy, but there is virtually no competition in the featherweight division.