What’s next for Chito Vera after his knockout win at UFC 268? 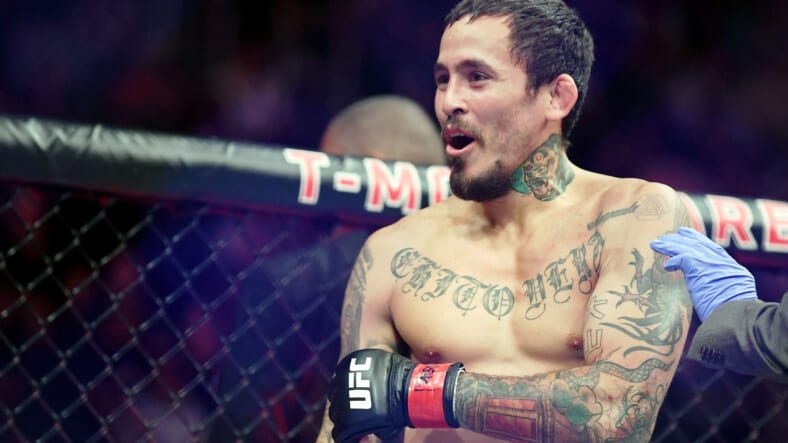 This past weekend at UFC 268, we saw a battle in the bantamweight division which featured the past and the future. Former lightweight champion and top contender Frankie Edgar (24-10-1) was taking on Marlon “Chito” Vera (20-7-1).

Edgar was looking to bounce back after his loss in a title eliminator to Cory Sandhagen while Chito Vera was looking for a signature win. Throughout Vera’s UFC career, he’s been known to be a very slow starter and that didn’t change at UFC 268.

In the first round, Edgar was able to take Vera down and controlled him for the majority of the round. However, in the second round, Vera really turned things around. Chito became increasingly aggressive on the feet and landed some big shots.

In the third round, both men had their moments early. However, momentum was really with Chito as he continuously stalked Edgar throughout. Then, Vera landed a massive front kick to the face that knocked out the former UFC lightweight champion and gave Chito his signature win.

The updated UFC rankings came out today and Chito Vera is just outside the top ten coming in at number eleven. Going back to UFC 227 in 2018, Vera is now 7-2 in his last nine fights. However, many believe that he won one of those two losses.

That was a loss against Song Yadong (17-5-1). With this win, Chito is in a really tough spot in regards to the rest of the division. Guys in front of him include Marlon Moraes, Dominick Cruz, Pedro Munhoz, and Cody Garbrandt.

Garbrandt is moving to 125, Moraes is on a big losing streak, and Cruz and Munhoz fight at UFC 269. In theory, whoever wins that fight would make sense right? Well, Munhoz is also contemplating a move to flyweight while Dominick Cruz will want someone ranked higher.

That leaves Chito in a bit of no mans land. So, who should the UFC pair him with? To me, there’s a couple of options. On one hand, I really like the idea of him rematching with Sean O’Malley (14-1). There’s serious beef there and a sense of uncertainty given the way the first fight ended.

Chito got the TKO win, but an O’Malley ankle injury played a big role. That would be a really good fight that fans would be very hyped for. O’Malley takes on Raulian Paiva at UFC 269. Another possibility is Song Yadong if he wins this weekend at UFC Vegas 42.

If Song wins, the rematch with Chito makes a ton of sense with the winner ready to take on someone in the top ten. Chito deserves a top ten opponent, but he’s a little stuck right now. Either way, expect a good and entertaining opponent for him next time out.