What’s next for Chan Sung Jung after UFC Fight Island 6? 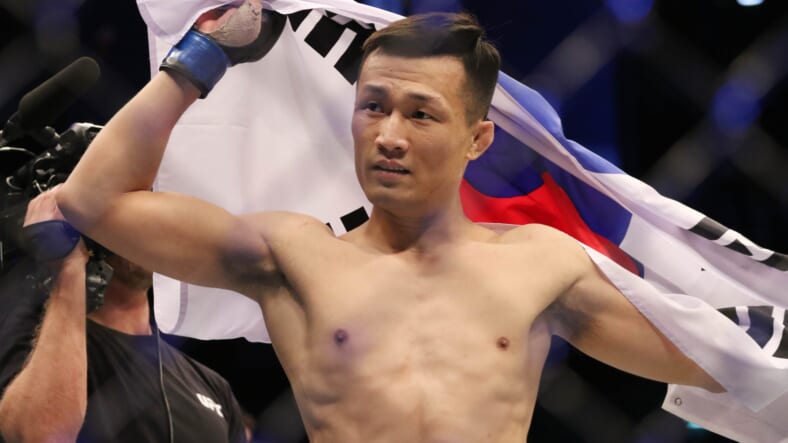 The Korean Zombie is one of the more popular fighters in the UFC‘s featherweight division. His dynamic striking and power along with his incredible heart make him a fan favorite. However, he didn’t show off what makes him special this past Saturday.

At UFC Fight Island 6, Chan Sung Jung (16-6) really struggled in his fight against Brian Ortega (15-1, 1 NC). Ortega had been out of the cage for nearly two years while the Zombie had been relatively active last fighting in December.

However, it looked like Jung was the fighter who had been inactive. All night long, Jung stayed on the outside and didn’t appear aggressive. Ortega used his improved striking to just pick apart Chan Sung Jung from the outside. Jung was even dropped twice.

In the end, the judges gave the shutout victory to Ortega at UFC Fight Island 6. A fight that was billed to be a war ended up being a largely one-sided affair. It was a big disappointment for the Korean Zombie. So what’s next for Chan Sung Jung inside the octagon.

What does the UFC do with TKZ?

Losing to the top contender in the division doesn’t set Jung back to far. However, it is disappointing as Jung was hoping to secure a UFC title shot with his victory. The one-sided nature of the loss will cause him to have to put together a string of wins to get back into the title picture.

In looking at the UFC‘s featherweight division, I think a decent next option could be a matchup with Josh Emmett (16-2). Emmett has won three straight and five out of his last six to get to the seventh ranking in the division.

Emmett is coming off of a bad knee injury, but he recently started resuming training. Jung didn’t appear to have any serious injuries, but it will take him a bit to recover from the loss. I think pairing these two could be a very good option for the UFC.