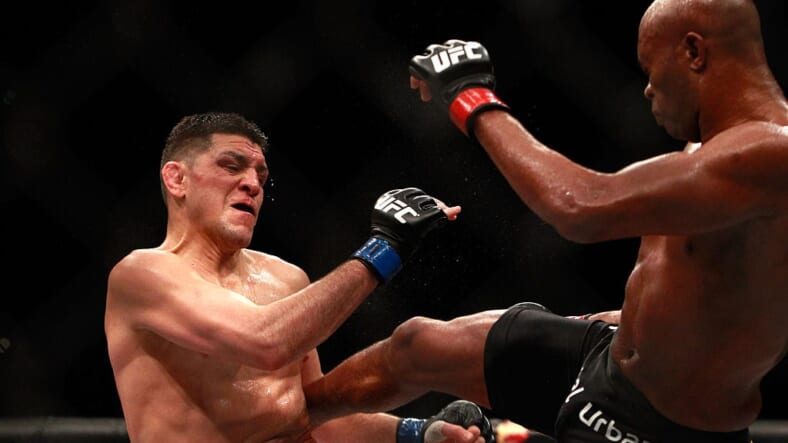 Dana White broke some UFC news to TSN this afternoon. White told TSN’s Aaron Bronsteter that the promotion was working on finalizing the return of Nick Diaz (26-9, 2 NC). Per White, Diaz would be returning in September to rematch against Robbie Lawler (28-15, 1 NC).

The fight would co-headline a UFC event in September. Worth noting that the fight is not finalized yet and there is not a finalized date. However, we have known for some time that Nick Diaz was getting ready to return to the octagon and Lawler is the perfect opponent.

These two men first met back all the way at UFC 47 in 2004. Both men were extremely young and green at the time. Lawler was the betting favorite going into the fight, but that was the first time we really got to see the striking of Nick Diaz.

Diaz went on to knock Robbie Lawler out and shock everyone at UFC 47. Both men have since gone on to have incredible careers. Lawler rose all the way to the top of the sport by becoming the UFC welterweight champion.

That said, Ruthless is on a really tough stretch right now. After losing his title to Tyron Woodley back in 2016, Lawler has gone 1-4. The former champion has lost four-straight, but he will look to get back on track and avenge his UFC 47 loss in September.

For years, Nick Diaz has teased a return to the UFC. We would see him training hard on social media and he would say that he wants to come back. However, a deal never got done and it’s been years since we’ve seen Diaz compete.

The last time Diaz stepped inside the octagon was UFC 183 in January of 2015. Prior to that, his last fight was March of 2013. Since 2012, Nick Diaz has only fought three times in the UFC.

Diaz is getting ready to turn 38 years old and he’s had years to let his body recover from all of his fights. Who knows, we might see the best Nick Diaz we’ve ever seen in September. Either way, the die-hards are going to be glued to their TVs to watch this rematch.