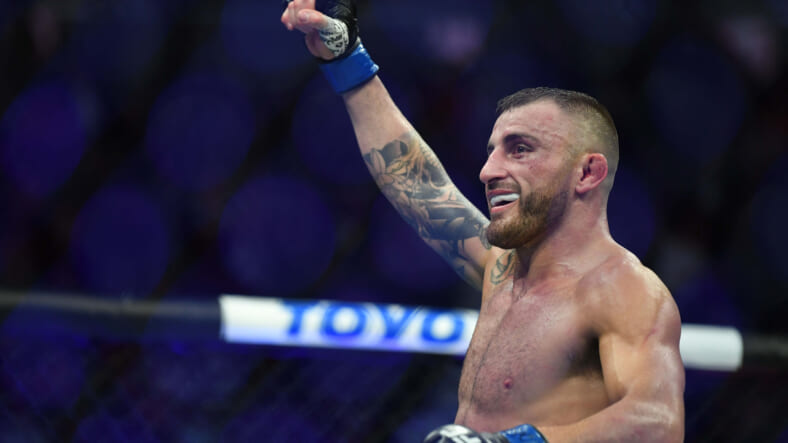 Well, it appears that the UFC is closing in on a replacement for Max Holloway. Last week it was announced that Alexander Volkanovski (23-1) and Holloway would be completing their trilogy for the featherweight title. However, just days after the initial announcement, the fight was off.

Holloway tweaked an injury and the fight was called off. However, the UFC is wanting to keep Volkanovski active as the timetable for Holloway’s return is not known. With that, all top featherweight contenders started volunteering for a shot at the champion.

Even Henry Cejudo through his name in the hat to replace Holloway at UFC 272. Giga Chikadze, who is competing this weekend, had his reps come out and say that he would love the fight assuming he gets through Calvin Kattar on Saturday.

All that being said, it appears that the UFC and the champion have settled on a replacement. From the beginning, Volkanovski made it clear with a tweet on who he preferred to fight. It’s a guy he’s wanted to fight for some time and that guy is The Korean Zombie, Chan Sung Jung (17-6).

Volkanovski has made it clear that he’s wanted to compete against The Zombie for sometime. However, the fight never came together and now, it appears like it’s going to. Ariel Helwani reported yesterday that the UFC is planning on this fight with a change to the original date.

Originally, the UFC was planning on Volkanovski and Holloway fighting in March. However, now the plan is for the Volkanovski – Jung matchup to take place in April at UFC 273. In addition, it also looks like the title fight between Aljamain Sterling and Petr Yan which was the UFC 272 co-main event will also shift to April.

Could mean big things for the March PPV. The last time we saw Jung was back in June when he headlined a Fight Night against Dan Ige. The Zombie put on a great performance and earned himself a decision win. It was a nice bounce back after his loss to Brian Ortega.

Overall, Jung is 3-1 in his last four UFC fights. This will be his second crack at the title but it will be his first shot since he lost to Jose Aldo back in 2013.