UFC: What is next for Jorge Masvidal? 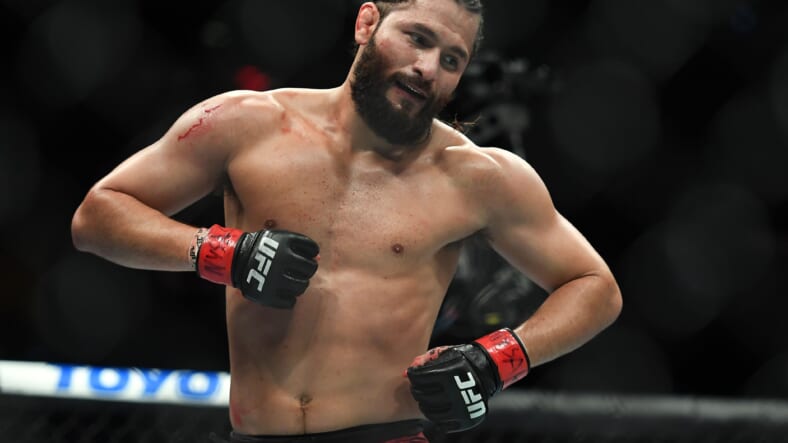 A couple of months ago, this was an easy question to answer. Jorge Masvidal (35-13) was going to be fighting for the UFC welterweight title in his next fight. “Gamebred” won fighter of the year in 2019 after knocking out top welterweights Darren Till and Ben Askren. Masvidal capped his year off with beating Nate Diaz for the BMF title back in November. All that was left was for Masvidal to fight Kamaru Usman for the title. However, due to failed negotiations we have seen the title shot go to Gilbert Burns. Now that the title shot is gone, what is next for the BMF? Let’s take a look at four realistic options for Jorge Masvidal’s next fight.

This fight would have the most personal heat, and it’s the fight that probably makes the most sense from a rankings perspective. Former teammates and roommates turned bitter rivals. A fight between Masvidal and Colby Covington (15-2) makes all the sense in the world. Masvidal has been wanting to get paid more for his next fight. A fight with Covington would be a big money maker. Love him or hate him, Colby Covington has turned into must see TV. After reinventing himself a couple of years ago, he has blown up in popularity.

The two men were once closer than brothers if you just take a look at their Instagram accounts from a few years ago. They were both constantly talking about taking over the UFC‘s welterweight division together. Fast forward to now, and both men cannot stop insulting each other in public whenever the other is mentioned. Covington has left American Top Team due to all of the tension that was in the gym. Whether it was a shoot or reality, the heat has seemingly become real between the two. This fight would be a massive seller for the UFC. A fight between Covington and Masvidal would also give a clear number one contender to challenge the winner of the Usman/Burns fight in July.

When everything started to go south with the title negotiations, Masvidal turned his attention to Nate Diaz (20-12) with one tweet.

Lets run it back #theresurrection #andstill

This tweet caught a lot of people off guard considering the fact that everyone was assuming that Usman/Masvidal was opening. Of course we all learned how the negotiations went, and now Masvidal is left without a dance partner. Well, the November BMF title fight left a lot to be desired. Not because of the fight itself, but because of how the fight ended. The fight was getting ready to head into the championship rounds when a ringside doctor called it off due to a cut.

Diaz had some really good moments in the third after Masvidal had dominated most of the fight. Masvidal made more money against Diaz than he was offered to fight Usman. Well, how about running back the BMF title fight as Masvidal suggested? Have to think that the UFC would pony up a little more money considering the star that Nate Diaz is. This would give Masvidal a fight, and it would give the fans a proper conclusion to the BMF title fight that they were robbed of in November.

Probably the easiest thing for Masvidal to do at this point is wait. Kamaru Usman (16-1) and Gilbert Burns (19-3) are fighting in a couple of weeks for the UFC welterweight title. Masvidal can sit on the sidelines while these two go at it. After the fight is over, Masvidal can go back to the UFC to negotiate fighting the winner. The UFC supposedly made a last minute effort to try to get Masvidal to fight Usman on July 11th, but the money just never worked for Gamebred. After all of this fuss, maybe a second round of negotiations after July 11th will go smoother. In an ideal world, Usman would beat Burns on July 11th, and the UFC would move right back to try to book Usman/Masvidal. Realistically, I think this will be the first option considering the fight is just weeks away.

Red panty night anyone? Masvidal wants to get paid, and Conor McGregor (22-4) just wants to fight. McGregor “retired” due to the frustrations he had with the UFC for not giving him a fight. Masvidal passed up a title fight due to his frustrations with pay. Do you see where I’m going with this? A fight with Masvidal and McGregor is a win-win for everyone. Masvidal would get the paycheck that he’s searching for. McGregor would get an opponent who would stand and trade with him, and the UFC would hit it out of the park with a massive PPV. I mean imagine a fight with McGregor and Masvidal with no fans. You could hear every word that the two would say to each other. The McGregor fight is one that Masvidal has wanted for a while, and it’s a fight that makes sense for both men. For Conor, he could lose the fight, but not lose ground in the lightweight division. It’s a fight that makes a lot of sense, but I’m not confident the UFC will move to book it.

It’s crazy, but the two biggest fights in terms of PPV money are the two least likely from the UFC‘s perspective. I just don’t see the UFC pushing to make the McGregor or the Diaz fight for Masvidal. My guess is that they will wait to see how July 11th goes. If Usman gets through Gilbert Burns, I think they start up the talks again to have Masvidal fight Usman for the title in the fall. If that fight doesn’t materialize the UFC could pivot to try and booking Masvidal with Covington. However, a roadblock there could be the UFC trying to book the rematch between Usman and Covington. I respect Masvidal for sticking to his guns, but if he gets another chance at Usman, I really hope he doesn’t pass it up. I don’t think the UFC will give him the money fights he’s looking for, so if he doesn’t get the title shot, who knows what’ll happen to him. Gamebred soared to stardom last year, and it is crazy to think that there’s a possibility that the 2019 fighter of the year will not fight in 2020.