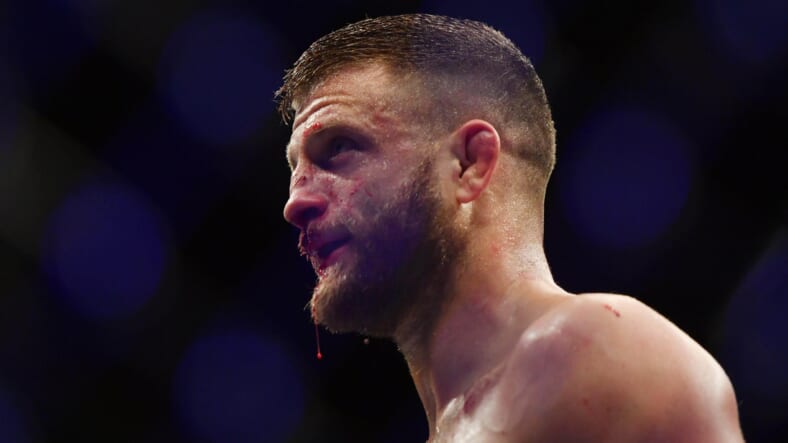 Tomorrow night in the headliner of UFC Vegas 63, we are going to see an absolute banger in the featherweight division. Top contenders Calvin Kattar (23-6) and Arnold Allen (18-1) will meet as both men look to take a step towards title contention.

Last time we saw Calvin Kattar was back in June when he took on Josh Emmett. The fight was razor close and I personally thought that Kattar won. However, the judges gave the fight to Emmett and now Kattar will look to get back on track. Before the Emmett fight, Kattar brutalized Giga Chikadze in January.

Arnold Allen made his UFC debut back in 2015 at 9-1. Since making his debut, he’s been a perfect 9-0 and continues to step up in competition. His last fight came back in March at UFC London when he welcomed Dan Hooker back to the featherweight division.

It wasn’t a warm welcome as Allen completely stormed Hooker and finished him in the first round. Now, he will look to take on his toughest test to date in Calvin Kattar.

I think we are going to see a stand up battle at UFC Vegas 63. On paper, Arnold Allen is the more well-rounded fighter. Between mixing in his kicks and grappling, he should have advantages in a multitude of areas in this fight. However, will he get the win?

That, I’m not so sure. When these two are in striking range, Calvin Kattar is going to feel right at home. He has some of the best pure boxing in the division and he’s going to hit Arnold Allen. If Kattar finds his flow early on, he could really touch up Arnold Allen.

I think that this fight is going to have a lot of back-and-forth. In the end, I just think that Calvin Kattar is going to land the more impactful strikes over the course of five rounds. Expect a war and expect a close fight, but I’m expected a win for The Boston Finisher.