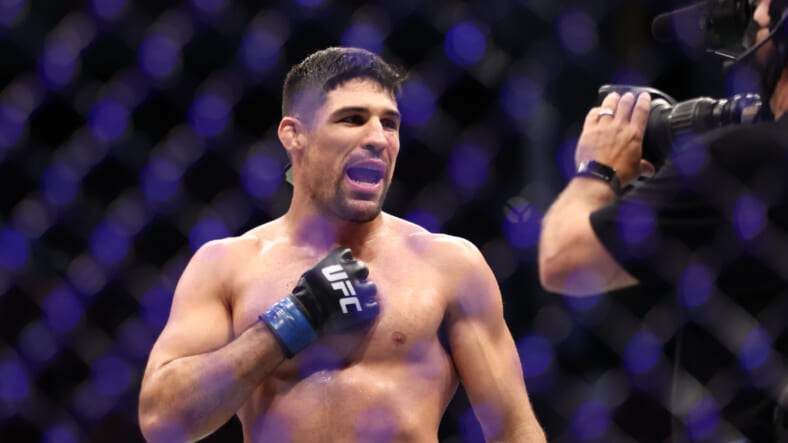 In the co-main event of UFC Vegas 59, we are going to see an absolute banger in the welterweight division. Top contenders will battle it out as Vicente Luque (21-8-1) takes on “Handz of Steel” Geoff Neal (14-4).

A couple of years ago, you would think a matchup between Neal and Luque would be a title eliminator. While there’s still a ton of hype on this matchup, the stakes aren’t quite as high. Vicente Luque is coming off of a loss for the first time since 2019.

Luque had won four straight all by finish before headlining a UFC Fight Night against Belal Muhammad. Luque had knocked out Muhammad in their first fight, but Muhammad’s wrestling was too much in the second fight.

Unlike Luque, Geoff Neal is coming off of a win. Neal defeated Santiago Ponzinibbio by split decision which snapped a two-fight losing streak. That losing streak came on the heels of Neal winning his first five fights in the UFC.

There are a lot of fights that you can say will be good and then they end up sucking. This UFC Vegas 59 co-headliner is a fight I can say with a decent amount of confidence is one that will be very good.

There’s no secret as to the game plan for either man. I think we are going to see a stand up war with two guys who are extremely technical. One thing that plays for this fight to me is the volume of Vicente Luque.

In Geoff Neal’s most recent performances, we’ve seen him a little gun shy. There seems to be a lack of a killer instinct and that could really hurt him here. Luque is going to come right after him and he’s going to throw volume.

In Luque’s last fight, he was constantly worried about takedowns from Belal Muhammad. He’s not going to have to deal with that from Neal. With that, I think he’ll fight free and loose which should translate to a decent performance at UFC Vegas 59.