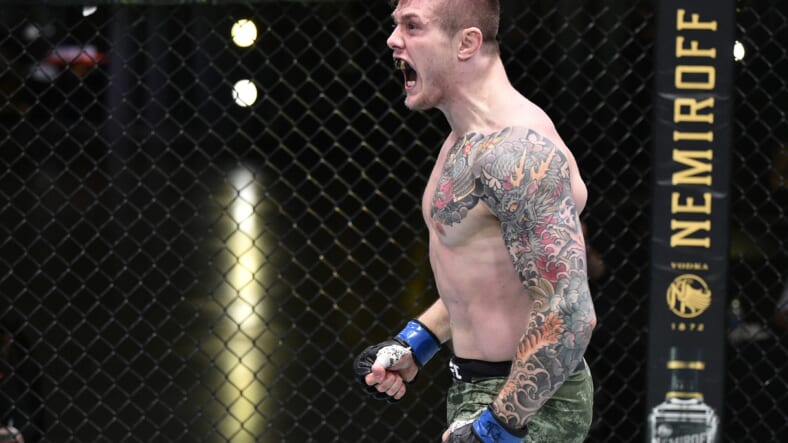 We have a fun one tomorrow night in the main event of UFC Vegas 23. The Italian Dream, Marvin Vettori (16-4-1), looks to continue his rise to the top of the middleweight division as he meets the entertaining Kevin Holland (21-6).

Originally, Vettori was set to take on Darren Till in the main event tomorrow night. However, just over a week ago, Till broke his collarbone and had to pull out of the fight. That’s when the UFC turned to Kevin Holland.

Holland was one of the fighters of the year in 2020. The Trailblazer went a perfect 5-0 which landed him a main event slot at UFC Vegas 22 against Derek Brunson. However, that is where the winning stopped and Brunson won a lopsided decision.

After the fight was over, Holland said he was leaning towards moving to welterweight. However, when the UFC Vegas 23 main event fell through, The Trailblazer stepped up and offered his services.Â

While he earned some major points with the promotion, he’s got an extremely tough task in front of him. Marvin Vettori continues to look better and better and he’s souring towards a UFC title shot. He got his first main event slot in December where he dominated Jack Hermansson.

When it comes to the main event at UFC Vegas 23 main event, it’s a really tough challenge for Kevin Holland. Holland is very good on his feet and we’ve seen him show off his power and slick strikes.

However, we’ve also seen him throw a little wild which throws him off balance. When he’s off balance, he’s even more susceptible to takedowns which he doesn’t do a good job of defending anyway.

Holland is a black belt in jiu jitsu, but we haven’t really seen him show off his submission game. Then you look at his opponent at UFC Vegas 23. Marvin Vettori is looking more and more like the complete package.

Yes, he has good striking and showed very good power in his last fight. However, we’ve also seen him show off his wrestling. In his fight with Israel Adesanya, he was able to land takedowns which brought the fight to a split decision.

If Vettori can take Adesanya down, he’s going to be able to take Kevin Holland down. Vettori has never been knocked out and I don’t see Holland doing it. I think this is going to be a pretty lopsided decision at UFC Vegas 23 and another win for The Italian Dream.