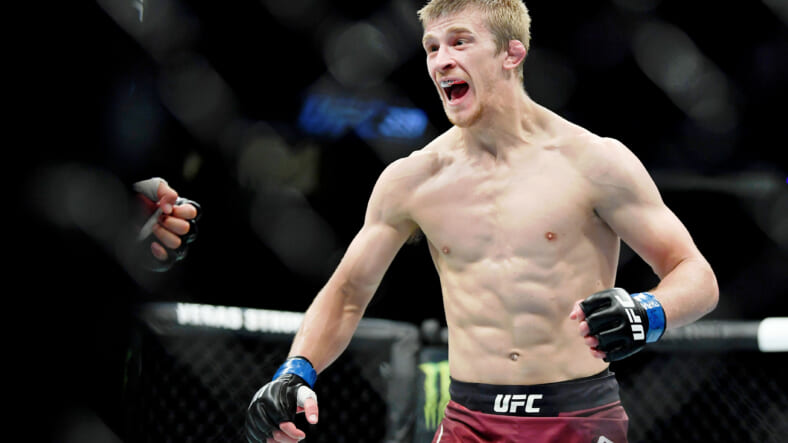 In the co-main event at UFC Vegas 23, we will see a very important fight in the featherweight division. Two top prospects will go head-to-head as England’s Arnold “Almighty” Allen (16-1) takes on “Super” Sodiq Yusuff (11-1).

Entering tomorrow’s co-main event, Yusuff is 11th and Allen is 10th in the UFC‘s featherweight rankings. Whoever wins this matchup is poised to move up the ladder and get a shot at a premier top ten name at featherweight.

Arnold Allen made his UFC debut back in June of 2015. However, since his debut, he hasn’t been the most active fighter. In almost six years, this is just the eighth time that Allen has made the walk to the octagon.

Despite the lack of fights, it hasn’t held him back from being impressive. In his seven fights in the UFC, Allen is a perfect 7-0. His last fight was in January of 2020 and he scored a decision win over Nik Lentz. He also has a decision win over former Strikeforce champion Gilbert Melendez inside the octagon.

With the wave of African UFC stars, another name to watch is Sodiq Yusuff. Yusuff hails from Nigeria just like UFC champions Israel Adesanya and Kamaru Usman. “Super” Sodiq looks like he can be the next great African star in the octagon.

Yusuff earned himself a UFC contract on Dana White’s Contender Series back in 2018. Since then, he’s competed four times inside the octagon going 4-0 and he stepped up competition along the way. His last fight was at UFC 246 in January of 2020 where he defeated the very tough Andre Fili by decision.

I’m very excited for this matchup at UFC Vegas 23. As I mentioned, whoever wins this matchup is going to take that next step in their careers towards the premier names in the featherweight division.

For Arnold Allen to be successful tomorrow night, he has to keep this fight close. He needs to mix his strikes with his grappling. Allen needs to land takedowns in order to win this fight.

While his striking is not bad by any stretch, I don’t like him in a distance striking matchup with Yusuff. On the flip side, Yusuff needs to keep this fight at range. He’s going to have the speed and the power advantage at UFC Vegas 23.

If Yusuff can keep this fight at range, he’s going to get the better of the exchanges. Someone is getting their first loss in the UFC tomorrow night and I could see it being either man. I really like the diverse attack that Arnold Allen can bring to the table tomorrow.

Allen’s kicks and his grappling ability might give Yusuff some issues. However, as much as I like Allen’s game, I believe Yusuff is going to win tomorrow. I think he’s going to land the more impactful shots and ultimately take home a relatively close decision win at UFC Vegas 23.