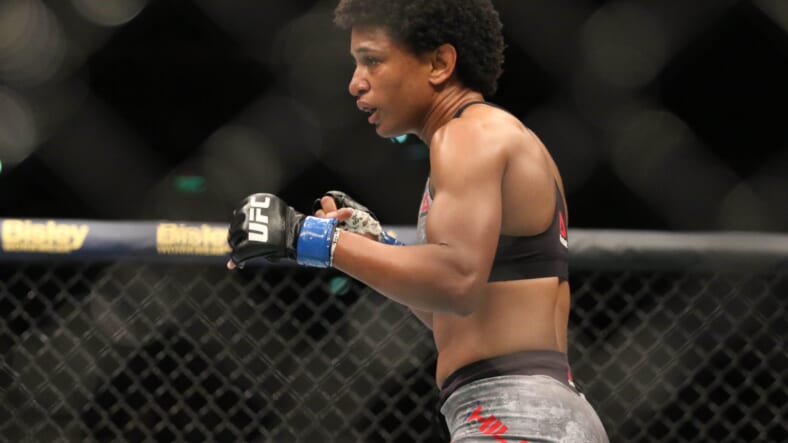 UFC Vegas 20 has lost one of it’s main card matchups. MMA Junkie was the first outlet to report that the anticipated strawweight matchup between Angela Hill (12-9) and Ashley Yoder (8-6) has been called off.

The officially reasoning is due to a COVID test. The UFC is no stranger to fights falling through due to COVID and neither is Angela Hill. This is her second matchup that has been scrapped during fight week due to COVID.

The matchup between Angela Hill and Ashley Yoder was a rematch from 2017. That night, Angela Hill won by unanimous decision. Hill was looking like a top contender in the strawweight division in early 2020.

“Overkill” had cracked the UFC rankings and she was taking on former title challenger, Claudia Gadelha. While the fight was razor close, the judges gave a split decision to Gadelha. A frustrated Hill was anxious to get back into the cage and she did in a five round main event against Michelle Waterson.

Unfortunately for Hill, the same thing happened. The fight was razor close and a split decision went to Waterson. Since these losses were both to top competition, Hill is still a fixture in the UFC rankings coming in at 12th.

The UFC has decided to keep this fight together. The matchup is now being pushed back two weeks to the Fight Night that is currently scheduled for March 13th. That’s when Ashley Yoder will have her chance at redemption.

It hasn’t been smooth sailing for Ashley Yoder inside the UFC. She entered the octagon at 5-1 and she looked like she could be a top contender. However, Yoder has just gone 3-5 in her eight fights inside the octagon.

If Yoder is able to defeat Hill in a couple of weeks, it will be massive for her moving forward. She needs a signature win and Angela Hill would be just that. However, if she loses, she might be on the chopping block after going 3-6 in the UFC.