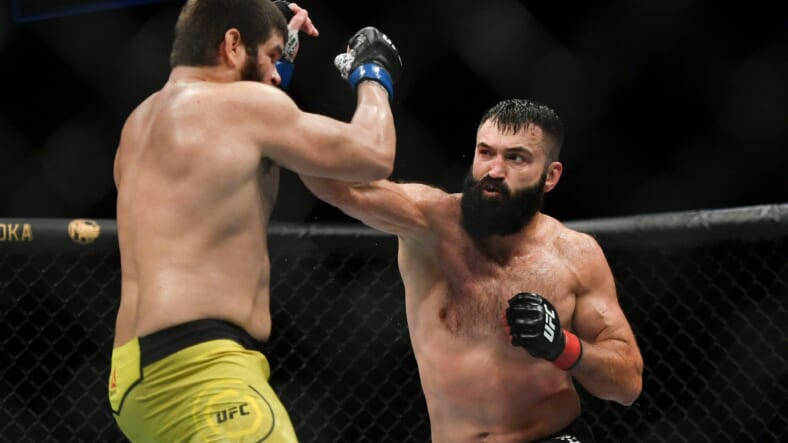 Tomorrow night at UFC Vegas 19, we will see an intriguing matchup in the heavyweight division. Former heavyweight champion, Andrei Arlovski (30-19, 2 NC) will be taking on top prospect, Tom Aspinall (9-2).

Aspinall will be making his third appearance in the UFC. While he’s already had two fights, we haven’t seen him long inside the octagon. In his first two fights, Aspinall was able to score first round finishes. Neither of those two fights went more than 95 seconds.

Aspinall is a very intriguing heavyweight. He’s a black belt in jiu jitsu, but he’s really known for his striking. One of the things that makes him so interesting is the fact that he trains with the boxing heavyweight champion, Tyson Fury. You can imagine Aspinall gets great work in at the gym.

He has a wealth of experience and he will bring a lot to the cage on Saturday night. Arlovski is now training at American Top Team and you can see the more measured approach he’s taken. In his last fight, he defeated another solid prospect in Tanner Boser by decision.

When it comes to the fight at UFC Vegas 19, Arlovski is going to have to be very crafty. At this stage in the game, I’m not expecting him to go out and outstrike Tom Aspinall. I just don’t believe that Arlovski has that in his bag anymore.

However, Arlovski does have a lot of tools at his disposal. We’ve seen Arlovski have a willingness to mix in his wrestling during his fights. He’s going to have to have a diverse approach in order to get the win tomorrow. However, even with that approach, he has a very tall order in front of him.

Yes, Arlovski is a former UFC champion, however, I just don’t believe this is a great fight for him. Aspinall is not a guy who’s going to go all out for the finish early and gas himself out. I’m expecting a very measured approach and with that, the right shot will come.

I wouldn’t rule out Arlovski having his moments early, however, I believe they will be few and far between. I’m expecting Aspinall to have a signature performance tomorrow and get this one done in the first round.

Prediction: Tom Aspinall by TKO – Round 1