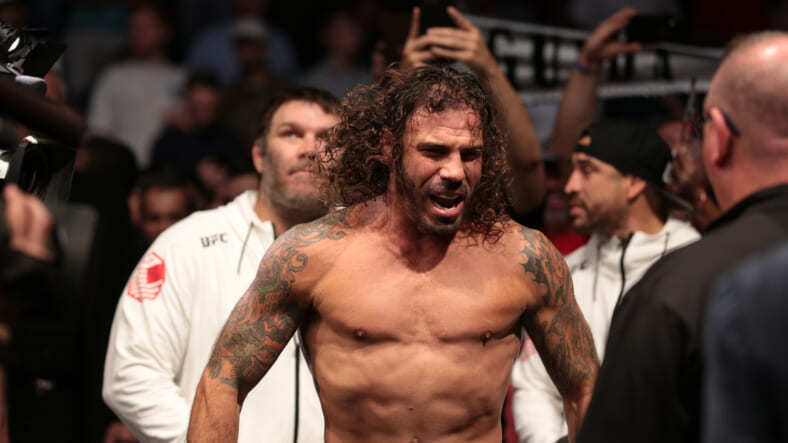 Tomorrow night at UFC Vegas 18, we will get to see a fun one in the lightweight division. Veterans, Clay Guida (35-20) and Michael Johnson (19-16) will battle it out on the main card. For Michael Johnson, he’s fighting for his UFC career tomorrow night.

When you look at Michael Johnson’s career in the UFC, it really makes you scratch your head. When you look at the highpoints, he’s defeated guys like Tony Ferguson, Dustin Poirier, and Edson Barboza.

However, he also has four losing streaks in the UFC that range from two to three fights. Currently, he’s on a three-fight losing streak and he was finished in two of those. Johnson has beaten some of the best guys in the world, but he’s also lost to people he should’ve easily beat.

With losing three in a row, he could be cut from the UFC should he lose tomorrow night. He’s got a tough test in front of him in The Carpenter. Clay Guida has been with the UFC since 2006. He’s always been a very good fighter, but never an elite fighter.

Guida has some great wins in the promotion like defeating Nate Diaz, Anthony Pettis, and Rafael Dos Anjos. However, every time he came close to a title shot, he lost. Guida has lost two in a row leading into tomorrow night.

When you look at this matchup at UFC Vegas 18 on paper, Michael Johnson should win this fight. He’s got the better striking, he’s got very good hand speed with pop and he has good grappling skills. Overall, he just is more skilled than Clay Guida.

Those skills are why he has some of the big wins that he has in the UFC. However, with Michael Johnson, you don’t always get the best version of him. Sometimes he sits back a little too much and let’s the action pass him by.

Clay Guida is a tornado who’s going to constantly be moving and throwing. His activity level is always extremely high which could pay off here. For Guida to pickup the win tomorrow, he’s going to have to outwork Johnson. He needs to push Johnson at a high pace and score points while doing so.