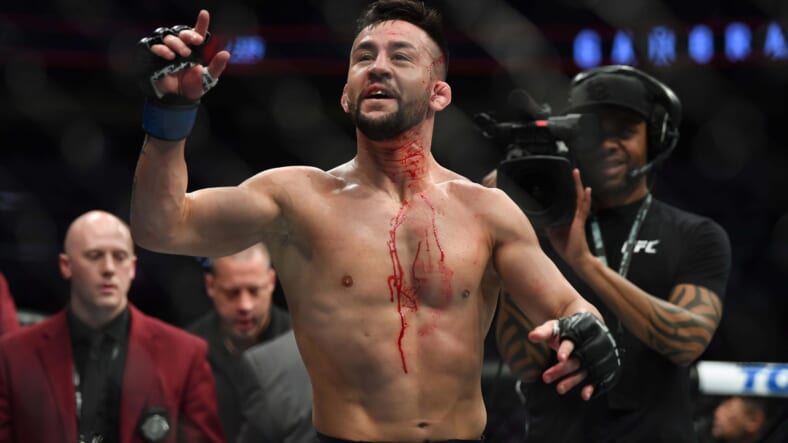 COVID-19 has taken down another UFC fight. UFC bantamweight contender, Pedro Munhoz (18-4, 1 NC), has been removed from his fight with Frankie Edgar (23-8-1) on July 15th after testing positive for COVID-19. Munhoz becomes the second fighter since Friday to have a fight scrapped due to COVID-19 after Gilbert Burns lost his title shot to the disease.

Pedro Munhoz vs. Frankie Edgar, scheduled for July 15, has been canceled, sources say, after Munhoz tested positive for COVID-19 earlier today. Munhoz is feeling OK at this time. Edgar won’t get a replacement. Unclear when he’ll finally make his 135-pound debut.

Next Steps for the UFC

At first, the plan was to scrap Edgar from the UFC‘s July 15th card and look to re-book his bantamweight debut. However, there have been a couple of bantamweights who are on Fight Island who have thrown their names into the ring as potential replacements for Munhoz.

I’m on Fight Island and ready to go. https://t.co/mmlbkc8Je2

I can step in for Pedro, let’s go @FrankieEdgar corona free and fully violent @ufc @danawhite

The UFC is in a very fortunate spot to have two guys, who are fringe top-15 bantamweights, ready to step in for Munhoz. Marlon Vera (15-6-1) is coming off of a razor close decision loss to Yadong Song while Ricky Simon (16-3) is coming off of a win against Ray Borg back at UFC Fight Night 171.

Either man would make for a quality replacement for Munhoz. The fact is, Edgar needs a good test in his first fight at 135 pounds. Very and Simon would both give Edgar a really good fight in his bantamweight debut. Edgar has been putting in the work to get the pounds down, and he just signed a new deal ahead of the July 15th fight. I’m not sure who the UFC will go with, but I think we should get a resolution on this in the next day or so.