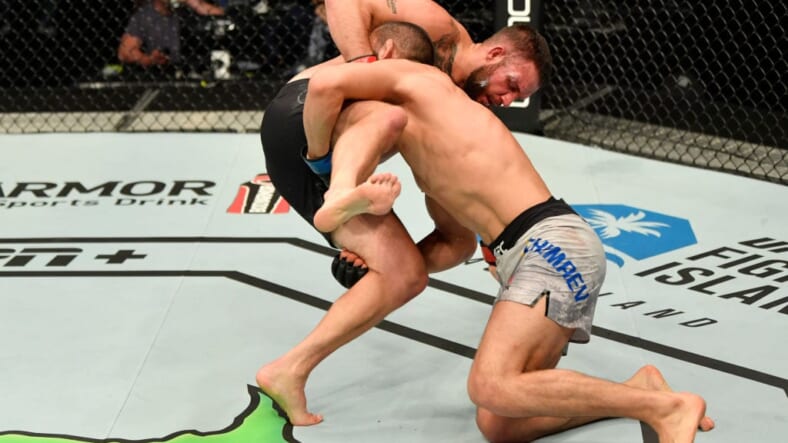 It’s not always easy being a rising fighter in the UFC. Sure, it only takes a few big wins to capture the attention of the sport. Especially if those wins are bonus-worthy performances. But breaking into the standings and displacing the top fighters already there isn’t easy. Khamzat Chimaev is finding out just how hard it can be. After a quick rise that led to him being noticed by MMA fans around the world, Chimaev has now had several potential opponents turn down fights.

These opponents want him to get more experience first. If you want to look at it from a more cynical perspective, you could say they want to avoid losing to a rapidly surging fighter. Either way, it leaves Chimaev in a rough spot. The UFC has decided to push him more and give him a headline fight – but actually finding his opponent hasn’t been easy so far.

One name, though, has stepped up to the plate: Alex ‘Cowboy’ Oliveira. Oliveira isn’t the ranked fighter that the UFC was looking for, but he does have a substantial record behind his name. He’s also won both of his fights in 2020, against Max Griffin and Peter Sobotta.

Oliveira is “right here” and ready to fight

Oliveira’s interest in fighting Chimaev was revealed in an interview with MMA Junkie. He says that, if Chimaev wants to pick and choose an opponent, he should pick him rather than waiting around.

“Iâ€™ll take the fight no one else wants. Chimaev, Iâ€™m ready for a fight at welterweight right now. I see you picking and choosing opponents. Iâ€™m right here,” Oliveira told Mike Bohn. “Iâ€™m itching to fight Chimaev. If you want to pick and choose opponents, Iâ€™ll fight you.”

But it remains to be seen whether the UFC will go for this matchup or not. After all, the fight is supposed to be a headlining one and the league may not want to headline two fighters outside the top 15.

At the least, though, Chimaev has a potential opponent on the table. If there’s not another matchup in the top 15 that opens up, we may just see this opponent for one of the UFC’s rising stars. And with Oliveira having good experience in the UFC, it would be intriguing to see if Chimaev’s hot streak continues against him.