UFC: Kamaru Usman is not on the same level of Georges St. Pierre yet 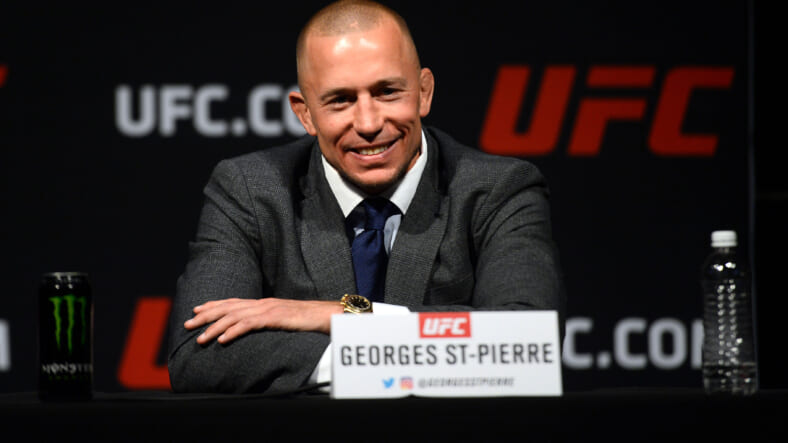 Recency bias is a huge thing in the UFC. We see it all the time where a fighter will put on an amazing performance and people are quick to say either it’s the greatest performance of all time or a fighter belongs in the GOAT conversation.

It’s always important to take a deep breath and take a step back after those incredible performances. Last Saturday at UFC 258, Kamaru Usman (18-1) defended his welterweight championship for the third time. He finished Gilbert Burns (19-4) in the second round.

Kamaru Usman looked sensational and he showed off that he’s the total package. He’s got incredible grappling and now his striking has progressed to being some of the best in the division. After the fight was over, there was already talk about where Kamaru Usman ranks against the greats.

Part of the reason for this is the fact that Usman’s win on Saturday was his thirteenth straight victory in the UFC‘s welterweight division. That win broke the previous all time record held by Georges St. Pierre (26-2).

GSP is widely considered to be either the greatest of all time or on the short list. His reign in the UFC was truly something special and it’s even more remarkable considering that he walked away at 32 years old. One year younger than Kamaru Usman is now.

Sure, GSP came back and won the middleweight title at UFC 217. However, his welterweight reign came to a close at just 32 years old when he decided to walk away from the sport. Who knows what GSP could’ve done if he would have kept going back in 2013 and stayed motivated.

Is the UFC champ on the same level as GSP?

After Saturday night, there were some people that have staked the claim that Kamaru Usman is on the same level as the UFC hall of famer, Georges St. Pierre. A big point to that argument, as Daniel Cormier said this week, is the competition level.

The MMA game has evolved so much just in the last ten years. Fighters now are better than ever and some believe that the stiffer competition should give Usman more of a bump. Frankly, I agree with that statement.

However, it’s important to remember that Usman just completed his third title defense. Yes, he’s won 13 in a row in the division, but he’s only defended his title three times. There’s something to the pressure of title fights regardless of competition. At his peak, GSP defended the welterweight title nine times.

Overall, St. Pierre was 13-2 in title fights between welterweight and middleweight. In my opinion, the two greatest fighters in UFC history are Jon Jones and Georges St. Pierre. Their body of work cannot be denied and they deserve those spots on the mountain.

Yes, the competition is better than ever now. However, Kamaru Usman has more work to do before he’s on the same level as GSP. Will it take him nine title defenses to get there? I don’t believe so because of the competition level. However, he definitely needs more than three.