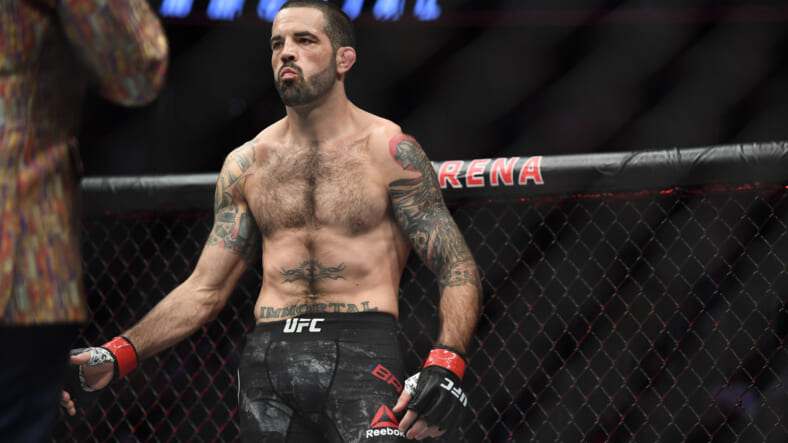 Tomorrow at UFC Fight Island 7, fight fans are getting to see a fight that we’ve waited years for. After years of this fight being discussed, we will finally get to see Matt Brown (22-17) and Carlos Condit (31-13) go to war.

Matt Brown is looking to bounce back from his knockout loss that happened back in May at the hands of Miguel Baeza. That loss snapped a two-fight winning streak for Brown where he had knocked out Ben Saunders and Diego Sanchez.

It’s been a very interesting ride for Matt Brown in the UFC. Brown had always been considered kind of a journeyman fighter early on. A fighter who was extremely entertaining, however, he could never get to the top.

Then we hit 2012. Staring in 2012, Matt Brown went on a seven-fight winning streak which included a win over Stephen “Wonderboy” Thompson. That winning streak put him in a title eliminator against Robbie Lawler where he ultimately fell short.

While he’s had some entertaining fights since, he’s not been able to get back to that level in some time. Carlos Condit has been going through the same thing. Condit snapped a five-fight losing streak back in October on Fight Island.

The former interim UFC welterweight champion has struggled a lot since 2016. Like Brown, Condit lost a crucial fight to Robbie Lawler which seemed to really turn his career downhill. He’s looking to win his second straight tomorrow in what’s his final fight on his UFC contract.Â

In reality, this is just a really fun matchup. These two are legends to the die-hards and even if they are far pass their primes, it’s just going to be fun to see these two mix it up at UFC Fight Island 7.

When it comes to the prediction, to me it’s going to come down to how Condit fights. For Carlos Condit to win, he needs to stay away from wild exchanges. I believe he’s got the technical advantage.

Matt Brown has the raw power advantage and for him to win, he needs it to be a brawl. If Condit is drawn into a brawl with Matt Brown, he might run the risk of getting knocked out or losing a decision.

Given the gravity of the situation for Condit, I expect him to fight smart. Don’t get me wrong, we are going to see some big exchanges, but I think Condit is going to work from the outside and edge this one out. I actually see this one going the distance.