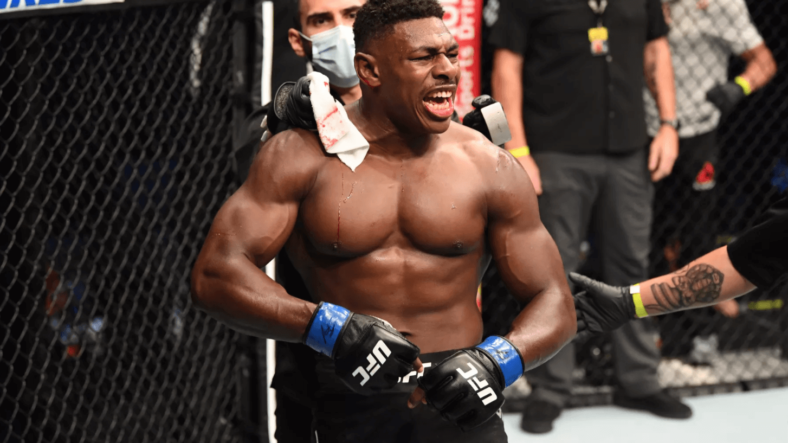 Tomorrow at UFC Fight Island 7, we will see the return of a middleweight who has a lot of eyes on him in 2021. New Mansa, Joaquin Buckley (12-3), is back in action as he takes on Alessio Di Chirico (12-5) on the main card tomorrow.

Joaquin Buckley had a very interesting 2020. He fought for the first time on July 31st for LFA and he won by second round knockout. The UFC called up the Bellator veteran and asked him if he’d step in to face Kevin Holland on one week’s notice.

Buckley was knocked out in the third round by Kevin Holland. However, the UFC decided to keep him around. He then got a shot against Impa Kasanganay on Fight Island. That is where he pulled off possibly the knockout of the decade. You can view that knockout here.Â

After Buckley knocked out Impa, he went on to knockout Jordan Wright at UFC 255. Buckley has a lot of momentum entering this year and there are a lot of eye balls on him. The opposite could be said of his opponent tomorrow afternoon.

Standing in front of Buckley is Alessio Di Chirico. Di Chirico is an seven-fight veteran in the UFC. However, he will make the walk having lost three in a row. One more loss and he might be out the door.

Di Chirico currently holds a record of 3-4 in his seven fights. His last three losses have included a loss to Kevin Holland and a loss to Zak Cummings. Di Chirico is a solid overall fighter, but it’s going to take a lot for him to win tomorrow.

In all honesty, this fight seems like a showcase fight for Joaquin Buckley. Di Chirico is not a bad fighter by any means, but the UFC is putting a lot of stock in Joaquin Buckley and I think they wanted his 2021 to start off well.

Di Chirico has struggled against fighters who push the pace and walk him down. Well, that’s really all Buckley does. Buckley is going to come forward tomorrow and put a lot of pressure on Di Chirico while looking for the knockout.

The one thing going for Di Chirico is that he’s durable. He’s never been finished by strikes in his career. If he can whether the storm early from Buckley, he might have an advantage later in the fight.

If I’m in the Di Chirico camp, I’m going to try and grapple as much as possible. Try to tire out Buckley and hopefully win the later rounds. If he just strikes with Buckley at UFC Fight Island 7, he’s going to be in big trouble.

Ultimately, I think Buckley is going to pickup the win tomorrow. Di Chirico’s only real chance is to tire out Buckley and win by points in my opinion. Call me a believer of the hype, but I think Buckley gets another knockout tomorrow.

Prediction: Joaquin Buckley by TKO – Round 2