UFC: Curtis Blaydes only cares about what the win, not what fight fans want to see 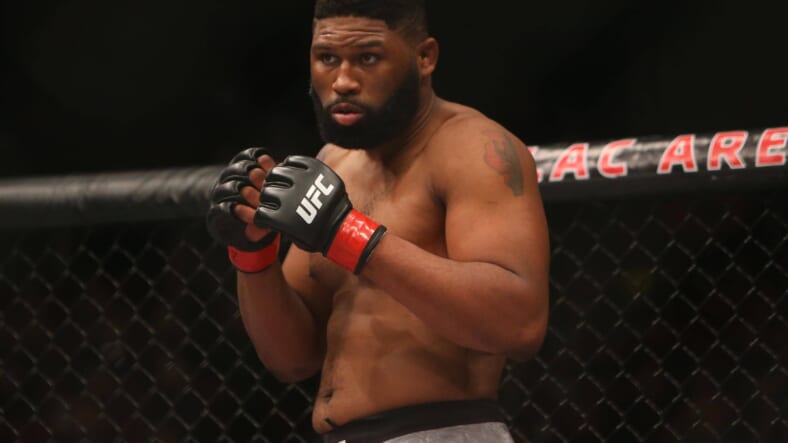 Tomorrow night in the headliner of UFC Vegas 19, Curtis “Razor” Blaydes (14-2, 1 NC) will be going for his fifth straight victory. Standing in front of him is “The Black Beast” Derrick Lewis (24-7, 1 NC). The fight is shaping up as a classic hero vs villain type of fight.

For Curtis Blaydes, the path to victory tomorrow is pretty clear. While he’s certainly shown improved standup over the years, the path to a victory at UFC Vegas 19 lies within his wrestling. Blaydes might be the best wrestler in the UFC‘s heavyweight division at the moment.

When he’s on, he’s incredibly difficult to get off of you. Blaydes has tremendous strength and shows great control once the fight does get to the ground. Once it’s there, he also does a fantastic job of landing vicious strikes. Just ask Alistair Overeem about that.

The only real way for Derrick Lewis to win tomorrow is by knocking Blaydes out on the feet. Blaydes knows this and he doesn’t plan on playing with that fire. He knows the fans want to see a heavyweight war at UFC Vegas 19, but his inner “pettyness” won’t give in to what the fans want to see.

UFC wins is all Blaydes cares about

Blaydes took to the mic at yesterday’s press event and talked about his strategy. Blaydes said, “I’m very petty. The more you don’t want me to do it (wrestle), the more I’m going to be like ‘FU’ I’m going to do it. I know people don’t wanna watch it. You’re going to watch it.”

The top UFC heavyweight brought up some great points in giving his reasons. He brought up the fact that his current contract is paying him $100,000 to show and $100,000 to win. Blaydes said he will take whatever path necessary to win to provide the best future for his daughter.

Blaydes also brought up the fact that he will not give in to fans who won’t care about him once he walks out of the cage. In reality, he makes a lot of strong points. Blaydes is one of the best heavyweights in the UFC and he’s earned that distinction by doing it his way and not giving in for the purpose of entertainment.