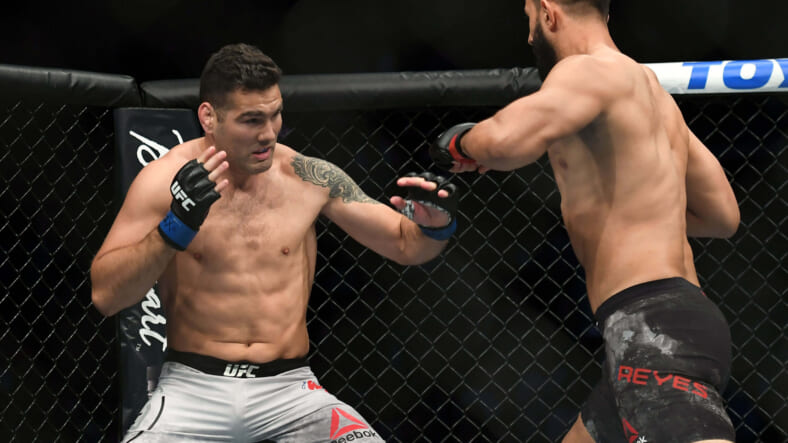 Former UFC middleweight champion, Chris Weidman (14-5), will be making his first appearance in 2020 on August 8th. The former champion will be taking on rising middleweight contender, Omari Akhmedov (20-4-1). The fight will be on the same card that is being headlined by heavyweights, Derrick Lewis and Alexey Oleinik.

Former UFC middleweight champ’s back is against the wall

Chris Weidman has fallen under some serious hard times over the last few years. Weidman was at one point 13-0, and was considered one of the best pound-for-pound fighters in the world. Since then, Weidman has gone 1-5 being knocked out in all five of his losses. It is important to note that in four of those five losses, Weidman was doing very well in every fight before getting caught. The last time we saw Weidman was in October against Dominick Reyes at UFC on ESPN 6. Weidman decided to move up to light heavyweight to restart his career. However, Reyes smashed Weidman and finished him within the first two minutes. After that loss, Weidman has decided to return to the division where he was once the champion, hoping for one more run.

Akhmedov looking for his biggest win yet

Akhmedov had a very impressive 2019. The Russian went 3-0 including a win over Ian Heinisch. As a result, Akhmedov jumped up to being the 11th ranked middleweight in the world. A win over Weidman would be massive for Akhmedov’s career. Sure, Weidman isn’t the guy he was five years ago, but he’s still got a big name in the sport. If Akhmedov is able to defeat Weidman, you will likely see him make another jump in the rankings. He might be gearing up for a top five opponent if he’s able to win on August 8th. It’s a big fight for both men. For Weidman, if he’s not able to pick up the win, one has to wonder if he’ll walk away from the sport. For Akhmedov, it would be the biggest win of his UFC career which could vault him towards the top five.