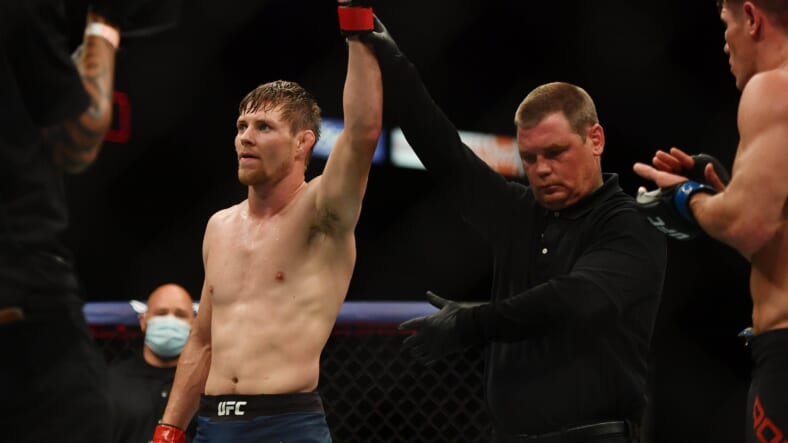 The UFC is finalizing an exciting featherweight contest for their Fight Night on Halloween. Per MMA Junkie, Bryce “Thug Nasty” Mitchell (13-0) will take on Andre “Touchy” Fili (21-7) on October 31st.

This will definitely be one of the more anticipated matchups on the UFC‘s Halloween card. The card is currently scheduled to be headlined by a matchup between Anderson Silva and Uriah Hall.

One of the UFC’s brightest prospects

Thug Nasty is one of the brightest young fighters in the UFC. Mitchell has defeated all four opponents he’s faced so far in the UFC, and he even pulled off a Twister against Matt Sayles at UFC on ESPN 7.

While Mitchell is a well rounded fighter, he is known for his incredible skills on the ground. Out of his 13 professional wins, nine of them have come via submission. He’s extremely creative off of his back, and there is really never a safe moment for opponents when the fight hits the mat. Mitchell just debuted at 15th in the UFC’s featherweight rankings.

Andre Fili will be the toughest test for Bryce Mitchell so far in his UFC career. Fili has been in there with some of the better guys in the division. In his UFC career, Fili has fought guys like Yair Rodriguez, Calvin Kattar, Michael Johnson, and Sodiq Yusuff.

While Fili has lost to those four top level guys, he’s battle tested against some of the best. Despite those losses, he does hold impressive wins over Myles Jury, Dennis Bermudez, and Charles Jourdain. Fili is extremely well rounded and he will pose some interested challenges for Mitchell.

This is a fantastic matchup in the UFC‘s featherweight division. If Mitchell is able to get through Fili, it will say a lot about his potential moving forward. If Fili is able to stop the hype train, it will be his second win in a row, and it might warrant a top ten opponent.