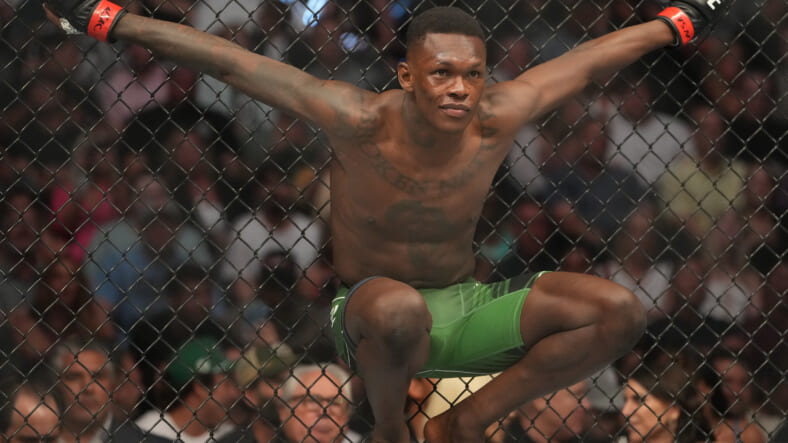 Tomorrow night in the main event of UFC 281, the middleweight title is on the line as Israel Adesanya (23-1) takes on a familiar foe in Alex Pereira (6-1). This will be the first time they’ve met in MMA competition.

The big storyline heading into this headliner is their two bouts in kickboxing. Alex Pereira won both of those fights and in one of them, he knocked Adesanya out cold. Nobody has been able to strike with Adesanya inside the octagon, but he’s not going to have that advantage tomorrow night.

The last time we saw Pereira inside the octagon, he knocked Sean Strickland out cold to earn this shot at the champion. Later in that same evening, Adesanya defeated Jared Cannonier to once again successfully defend his middleweight title. Adesanya is searching for his sixth successful title defense tomorrow night.

I’ve really gone back-and-forth with this prediction. Conventional wisdom would say that you should pick Adesanya because of his experience. Yes, Alex Pereira has two wins over Izzy in kickboxing, but this will only be his eighth MMA fight.

He’s never gone 25 minutes while Adesanya has done it multiple times. All that being said, I have a feeling Pereira has the big psychological advantage and that’s huge in this fight. Adesanya hasn’t looked the same this week. Normally, he’s the one who seems like the alpha dog during fight week.

However, he seems very tense this week. I think the knockout loss is going to be in his head a little heading into the UFC 281 headliner. So, what’s going to happen? It’s going to come down to the first round. Personally, I think it’s important for Adesanya to do two things: take a clean shot and get respect.

If he can show Pereira that he can hit him clean while taking a good shot, it changes the entire dynamic. Pereira needs to back Adesanya up and hit him clean and potentially hurt him. Try to cast doubt right away that Adesanya can beat him.

Who wins? I see a path for both men, but I do have Adesanya retaining his title at UFC 281. I think we are going to see more of a chess match rather than see a war. In that match, I think Adesanya will land a little more ultimately winning a decision.