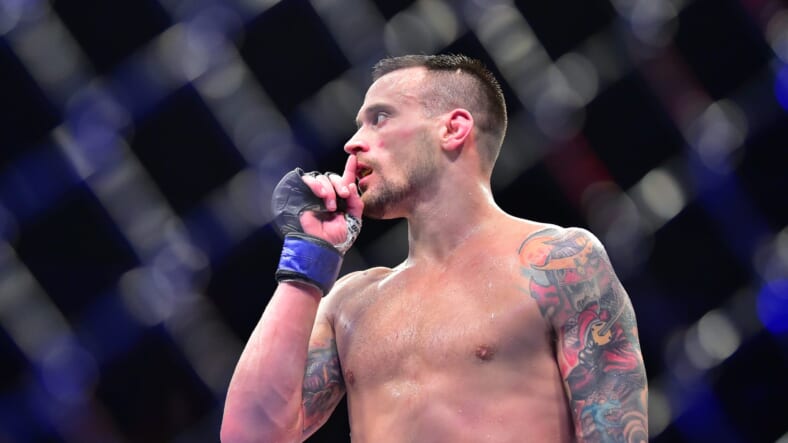 On the UFC‘s last trip to Fight Island, Joaquin Buckley (12-3) delivered arguably the knockout of the decade when he defeated Impa Kasanganay. Kasanganay had caught a kick of Buckley’s, but Buckley then spun and heel kicked Kasanganay to knock him out.

The MMA world was buzzing about the knockout which you can relive here. One week later James Krause (28-8) made the walk against Claudio Silva. Krause was able to pickup the unanimous decision win. His seventh UFC win in his last eight fights.

The welterweight from Kansas City then took to the microphone in his post-fight press conference. At the press conference he had some very strong words for the man who had captivated the world the week before.

Krause said of Buckley, â€œThe dudeâ€™s a clown, man. People just know him from his viral video, for his viral knockout. It was a beautiful knockout. The dudeâ€™s a sâ€“t box. Heâ€™s from my neck of the woods and all he does is sit on social media and talk sâ€“t all day.”

These comments obviously didn’t sit well with Buckley. Buckley just competed at UFC 255 where he scored a brutal knockout over Jordan Wright. It was the first professional loss for Wright.

After the fight, Buckley told Joe Rogan, “There’s other dudes out there that I want to fight. Talking that non-sense, and I really want to give it to him. Because when I hurt him, the referee can’t save him. Y’all know who I’m talking about.”

Will the UFC make the matchup?

Dana White was asked in his post-fight press conference if he thought the UFC would make this fight happen. White acknowledged that he love when two guys want the same fight and hinted that they would make it work.

Krause is traditionally a welterweight while Buckley has competed at middleweight. Now, Buckley did come in at 182 pounds for this last fight and Krause has competed before at 185 so I don’t think weight will get in the way of this potential UFC matchup.

This is a good ole fashion mid-card beef fight. These are the kind of fights that won’t headline a card, but they can steal the show. Both of these guys are from the same area of the US and both cannot stand the other.

Buckley has called for the fight to take place on January 23rd which would be UFC 257. I can imagine that the promotion will look to book this fight, but a lot will come down to Krause’s health. He tweaked his knee in his last fight, but if he’s ready, I think the fight gets made quickly.