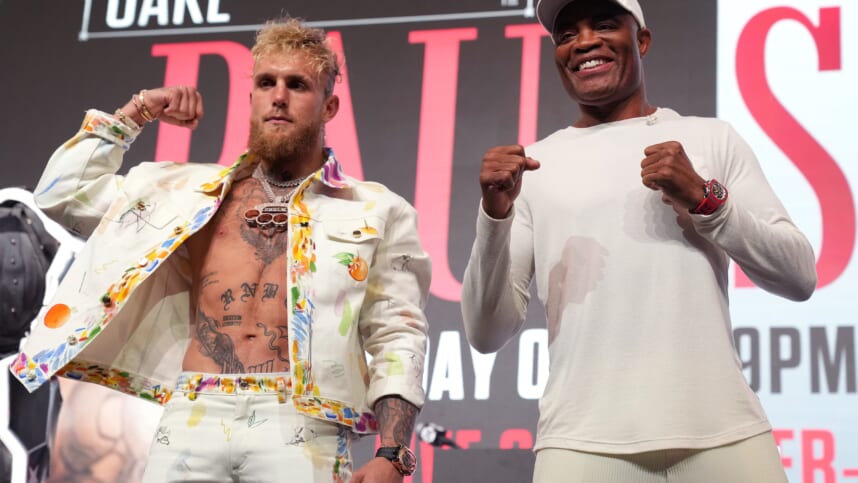 Tonight in the headliner of a Showtime Boxing event, we saw social media star turned boxer Jake Paul (5-0) take on arguably the greatest MMA fighter of all time in Anderson Silva (3-1). This was set to be Paul’s biggest test inside the squared circle.

Silva has moved over to boxing since closing his UFC career back in 2020. Since making that move, he scored an impressive win over former world champion Julio Cesar Chavez Jr. He also scored a first round knockout over Tito Ortiz.

Standing across from Silva was Jake Paul. Paul originally started boxing a YouTube personality and a former NBA player. Then, he set his attention on MMA fighters. He’s scored knockouts of Tyron Woodley and Ben Askren leading up to this bout with Silva.

The boxing bout kicked off with a touch of the gloves. Paul immediately takes the center of the ring and paws the jab. Silva staying on the outside gauging the range. Paul looks for a jab to the body. Silva dodges a big left from Paul. Paul upping the pressure here and lands a big straight to the body.

Now Paul doubling up to the body. Lead left hook and a 1-2 from Paul. Silva starting to loosen up a little on the toes. Big right to the body from Paul is blocked and then a lead left hook. Silva appears to be downloading information here.

Big counter left hook lands for Silva. That snapped the head back of Paul. They clinch with ten seconds left. The round comes to a close and it’s Jake Paul’s round to start.

Second round of this boxing attraction and Paul again takes the center to start. Jab from Paul starts the strikes. Now it’s Silva who opens up with his own pressure. Big left hand just misses from Silva.

Silva taunting Paul here and he’s going after him. Right hand from Silva and now a looping left. Another left from Silva and Paul clinches. Paul throws another big shot and Silva evades with beautiful defense. The round comes to a close and it’s definitely Silva’s round.

Entering the third and Paul knows he’s in a fight in this boxing match. Paul takes the center but Silva meets him there. Both men pawing jabs here. Check right hook for Silva and right to the body from Paul. Silva unloads a combination and he’s really pressuring Paul here.

A clinch from Paul and Silva taunts him. Silva is all over Paul with a ton of pressure. Right hand from Paul. Silva lands a 1-2 and they clinch again. Big right from Jake Paul and that seemed to get Anderson’s attention. Silva still light on his feet.

Jabs from Jake Paul and now he’s the one coming forward. Another stiff jab from Paul. Now Silva comes forward with a big combination. Paul is throwing major heat but Silva is doing a great job with his defense. Both men land near the end of the round. That round could have gone to either man.

Entering the fourth round and Jake Paul has weathered an early storm in this boxing match. Both men pawing jabs. Paul comes forward with a big combination that doesn’t land well. Counter left hand for Silva. Jab from Paul then Silva dodges a sweeping left.

They clinch with thirty seconds left. Jab from Silva and then he dodges a big shot from Paul. Paul with good defense but Silva catches him with a right. Back-to-back uppercuts from Silva to end the round. Another close round.

Halfway through this boxing match and both men have had their moments. Here we go with the fifth round. Both men bouncing on their toes. Paul unleashes three straight huge hooks to the body. Right hand now from Paul.

Now Silva pushing forward with his own combination. Huge left hook from Silva and Silva is making this a dog fight here in the fifth. Big uppercut snaps Paul’s head back. More uppercuts on the inside from Anderson Silva.

Jabs from both men land. Big jab from Silva and Paul is back up against the ropes. Left straight from Silva and another uppercut on the inside. 1-2 from Silva and the round comes to a close. Clearly Anderson Silva’s round in the fifth.

Entering the sixth and Jake Paul needs to get some respect back in this boxing match. Here we go with the sixth round. Paul opens the sixth with a jab. Left hand and a right straight from Paul. Double jab from Jake Paul and then they clinch.

Right hand and a left from Paul. Stiff jab now from Paul who is having a much better sixth round. Huge three punch combination from Paul. They clinch and Silva lands some shots in close. Jab from Silva and a shot to the body from Paul.

Left hook from Paul and an uppercut from Silva. Now they are in the corner just throwing bombs. Big shots from Silva. Uppercut from Silva and a hook. Paul with a combination. The round comes to a close and Paul might’ve been hurt there. Another close round.

Entering the seventh in this boxing attraction and I honestly don’t know who is winning this one. Both men trade jabs to start. Big shots to the body from Paul. Two straight jabs from Paul and Silva is just bouncing on the outside.

Right hand now from Jake Paul. Left from Silva and now here comes the spider. Combination from Paul. Silva backs Paul up against the ropes but Paul unloads a big combination. Silva is not throwing a ton here in the seventh. Right hand from Silva.

Big right hand from Jake Paul. Silva with a big combination along the ropes. Big left from Silva closes the round. Likely Jake Paul’s round.

Entering the final round of this boxing match and honestly, I think Silva is going to need a knockdown in this one. Double jab from Silva. Silva is ultra aggressive to start the final round. Big right hand from Paul and down goes Silva.

Not what the spider needed. Big left hand now from Paul. Paul now getting really aggressive. Two minutes to go. Big left from Silva and now they clinch. Huge right hand from Silva and they are in the corner. Both men are going toe-to-toe.

Huge right again from Silva. Now it’s Paul that looks a little hurt. What a fight and I can’t believe I’m saying that. 1-2 from Silva and Paul is looking for a bomb. Big combination from Silva but it’s a little too late. The final bell sounds and this should be a decision for Jake Paul.