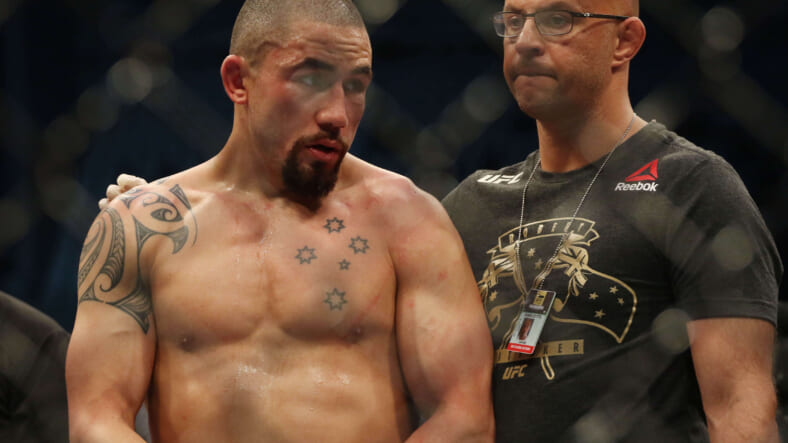 In the co-main event of UFC 254, there was a contest between the top two contenders in the middleweight division. Former world champion, Robert Whittaker (21-5), took on Jared Cannonier (13-4). Both were looking to establish themselves as the top contender.

Cannonier was a focus heading into this one after UFC champion, Israel Adesanya, called him out. If Cannonier was to defeat Whittaker, he would get the next shot. Bobby Knuckles was looking for his second straight victory after dropping the title to Adesanya at UFC 243.

As the co-main event of UFC 254 got underway, Cannonier opened with a massive leg kick. Cannonier looked extremely composed and patient to start. Whittaker was light on his feet looking for his openings. Cannonier dropped Whittaker with a leg kick in the opening minute.

Whittaker kept looking for shots up top, but nothing was landing. Cannonier continued to smash leg kicks as the first continued. Whittaker stung Cannonier with a straight right and really started to find his rhythm as the first round continued.

Whittaker’s speed was really bothering Cannonier as the first round ended. The former UFC champion opened the second round with a couple of crisp counters. Cannonier seemed to be a step behind Whittaker in the second round.

Cannonier started throwing leg kicks again, however, Whittaker was still doing good work up top. Both men were doing damage, but they had very different strategies. Damage was being added to Cannonier’s head while Whittaker’s legs were getting beat up.

Whittaker shot in for a takedown and briefly landed in with a minute left. Cannonier got right back up and started picking up the pace in the final minute. However, Whittaker was able to land a clean 1-2 just before the round came to a close.

The former UFC champ was bouncing looking for the 1-2 to open the final round. A stiff jab from Whittaker opened the striking. Bobby Knuckles landed a massive kick that sent Cannonier spinning. Whittaker followed up looking for the finish.

Results and next steps after UFC 254

After an entertaining co-main event at UFC 254, the judges gave the fight unanimously to Robert Whittaker (29-28, 29-28, 29-28). Outside of getting hurt in the final minute of the fight, it was a brilliant performance from the former champion.

Darren Till and Cannonier were being built up as popular contenders in the UFC‘s middleweight division. Adesanya voiced interest in fighting both, however, Whittaker defeated both of them in 2020. I know Adesanya defeated him last year, but Whittaker deserves another shot.

For Cannonier, he’s not done in the middleweight division. However, tonight showed some areas that he still needs to improve. He was just a step behind most of the night and that allowed Whittaker to pull away and ultimately get the decision victory.