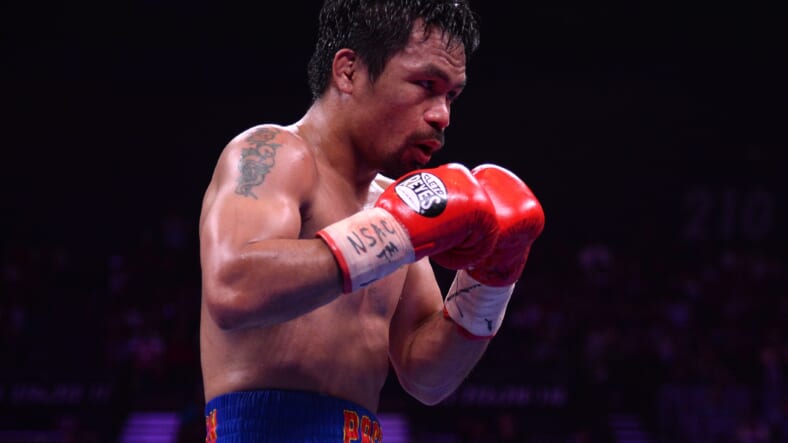 Yesterday, the world received some interesting news. Former UFC champion Conor McGregor made the claim that he would be boxing Manny Pacquiao for his next combat sport venture. It took a lot of people by surprise.

McGregor posted that tweet along with a few others including screenshots with UFC President Dana White. McGregor showed the fans that he was desperately trying to stay active when it comes to the UFC in 2020.

However, fights never materialized, and a frustrated McGregor said that he was walking away from the sport. However, recently, Dana White said that the UFC was working on something fun for McGregor. Although, he didn’t say what that something fun was.

It became increasingly clear that this potential boxing match with Pacquiao could be that something fun. This morning, Manny Pacquiao’s team confirmed the news with ESPN Ringside. His team said he would be taking on the former UFC champion next year.

Manny Pacquiao intends to fight Conor McGregor for a good cause ?? pic.twitter.com/Prkjy4djvC

The fight will mark the second time that Conor McGregor has made his way over from the UFC to the world of professional boxing. The first time was McGregor’s money fight against Floyd Mayweather back in 2018.

McGregor showed that he wasn’t just a UFC fighter that night, and even won some rounds against the great Floyd Mayweather. In the end, McGregor succumbed to a 10th round TKO, but he netted a massive payday for the fight.

McGregor returned to the UFC earlier in 2020 finishing Donald Cerrone in the first round at UFC 246. However, it was the last time the promotion could book McGregor. Now, as McGregor has been waiting, a new opportunity has risen.

Pacquiao hasn’t boxed in over a year, but he’s the reigning WBA Super Welterweight Champion. He’s won three straight fights since dropping a controversial decision to Jeff Horn back in 2017. Pacquiao has long been known as one of the best in boxing.

This will be another massive event that will pair the UFC against Boxing. This fight will not be nearly as big as Mayweather/McGregor, but it will definitely be a big event that should generate a ton of money.