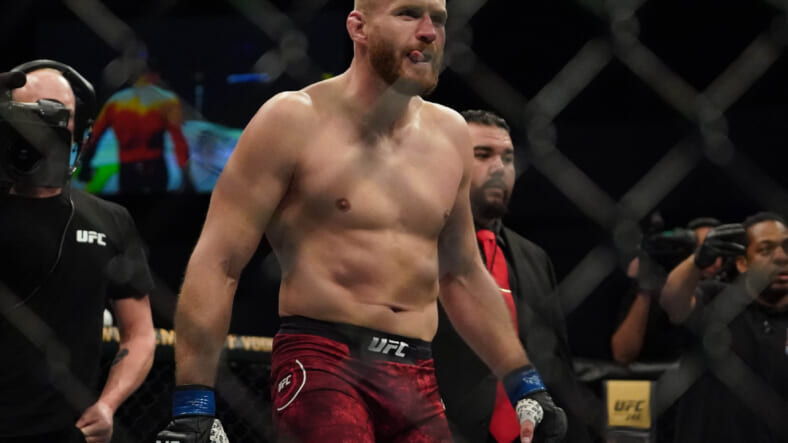 The UFC has finalized a huge matchup at 205 that looks like it will produce the next title challenger after Glover Teixeira. ESPN’s Brett Okamoto reported last night that at UFC 282, former light heavyweight champion Jan Blachowicz (29-9) will return as he takes on Magomed Ankalaev (18-1).

Back in 2018, Ankalaev made his UFC debut. That night, he lost in the final seconds to Paul Craig via triangle choke. This is still the lone loss in the career of Magomed Ankalaev. Since that loss, he’s gone on to win nine fights in a row.

The last time we saw him was at UFC 277 in July. He took on Anthony Smith and picked up the second round TKO finish. Granted, Smith had a ankle injury which mainly led to the stoppage. Nevertheless, it was the ninth straight victory for the light heavyweight from Dagestan.

Back in May, Jan Blachowicz met Aleksandar Rakic in a Fight Night headliner. It wasn’t the best performance from Blachowicz, but he did score the TKO win after Rakic tore his knee in the fight. It was his first fight since he lost the title to Glover Teixeira at UFC 267.

Prior to losing the belt to Teixeira, Blachowicz went on a run of five straight wins. In those five fight he defeated the likes of Israel Adesanya, Dominick Reyes, Corey Anderson, Jacare Souza, and Luke Rockhold. An incredible run for The Polish Power.

After defeating Rakic in May, Blachowicz lobbied for a title shot. However, after the war that UFC light heavyweight champion Jiri Prochazka and Glover Teixeira had, the promotion is running that one back. Instead of waiting, Blachowicz jumped at this opportunity to be booked in this title eliminator.