How does Francis Ngannou fare against Ciryl Gane after UFC 265? 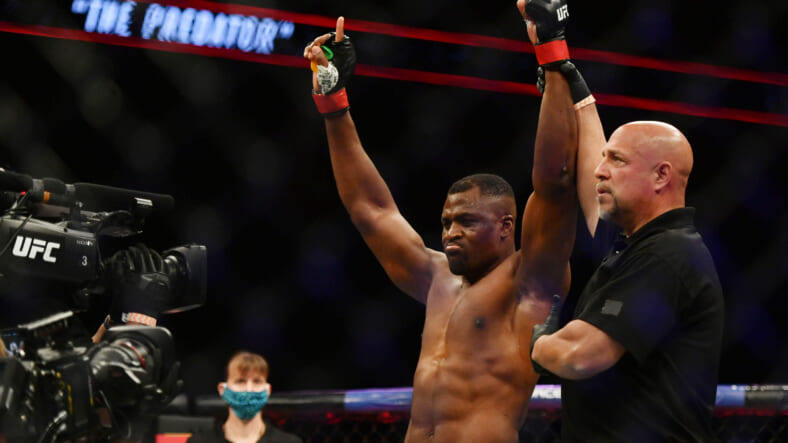 This past Saturday at UFC 265, the interim heavyweight title was on the line. The undefeated Ciryl Gane (10-0) was taking on heavyweight knockout artist Derrick Lewis (25-8, 1 NC) in Lewis’ hometown of Houston, Texas.

An extremely interested observer on Saturday night was the undisputed UFC heavyweight champion, Francis Ngannou (16-3). Ngannou just won the title back in March when he knocked out Stipe Miocic.

After the win, he took some time to visit Africa and didn’t arrive back in the US to start training until June. The UFC wanted Ngannou to turn right around and face Lewis in Houston to headline UFC 265.

Ngannou said he would fight in September, but turned down the August fight because he would only have six weeks to train. As a result, the UFC made an interim title and put Ciryl Gane in there with Derrick Lewis.

Gane is a former teammate of Francis Ngannou. The Frenchman completely dominated Lewis on Saturday night to become the interim UFC champion. Ngannou had a simple message for Gane after the fight, “See you soon boy”

How does the UFC champ fare against the interim champ?

Ciryl Gane is a nightmare for most heavyweights in the UFC. Gane has a complete skillset and brings a level of athleticism that’s very rare for the heavyweight division. He’s incredibly long and he’s light on his feet like someone in the middleweight division.

The UFC commentators talked about the fact that he will be a problem for Francis Ngannou. That said, I believe that Francis Ngannou is the only guy who can bring all this Ciryl Gane talk to a screeching halt.

While Derrick Lewis holds a win over Francis Ngannou, the two are not on the same level. Ngannou is very fast, extremely strong, and he’s very long. In fact, his reach is a couple of inches longer than Ciryl Gane’s.

The champion has the ability to close the distance fast enough and he’s long enough to land the power shots that Lewis simply couldn’t. Nobody should take the UFC 265 fight between Lewis and Gane and apply it to breaking down the fight with Ngannou.

Ciryl Gane just might have the perfect style to stifle the champion. However, if there’s anyone in the division who can catch Gane and put him to sleep, it’s Francis Ngannou. Going into their fight, I believe that Ngannou should still be the favorite, and I personally would still bet on the UFC heavyweight champ.