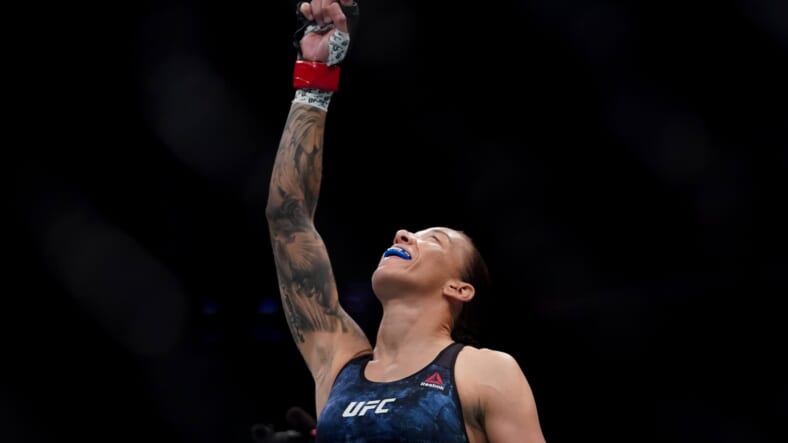 One of the more anticipated matchups of UFC Fight Island 4 was the bantamweight contest between Germaine de Randamie (10-4) and Juliana Pena (9-4). De Randamie was looking to bounce back after her title loss to Amanda Nunes at UFC 245.

The fight started out very well for the former UFC featherweight champion. De Randamie was doing a really good job in the first round of stifling Pena from distance. De Randamie seemed to hurt Pena a few times in the exchanges.

However, a very game Pena just ate every shot de Randamie threw her at her in the first round. In the second round, Pena was able to land a takedown early on. After that, Pena controlled most of the second round from the top position.

However, late in the round, a scramble found de Randamie on top. Surprisingly, de Randamie almost locked up a choke at the end of the round. It really showed off the evolution of the former UFC featherweight champion.

In the third and final round of the fight, Pena tried to put a lot of pressure on de Randamie. About halfway through the round, Pena landed a takedown, but landed right into a guillotine choke. De Randamie tightened the choke and put Pena to sleep. A massive win for the former UFC champ.

What’s next after UFC Fight Island 4

In my opinion, it’s very clear that de Randamie is the top contender in the bantamweight division. However, it’s going to be hard for de Randamie to get another title shot soon after just losing to Amanda Nunes in December.

Not only did she lose, but it was the second time that she has been defeated by the UFC champ. There are not a lot of viable challengers out there for Amanda Nunes. However, de Randamie is one despite the fact that she’s lost twice to her.

I think a reasonable next step for de Randamie would be fighting the winner of tonight’s main event. I think paring her against the winner of that fight would establish a clear next challenger for Amanda Nunes’ UFC bantamweight title.