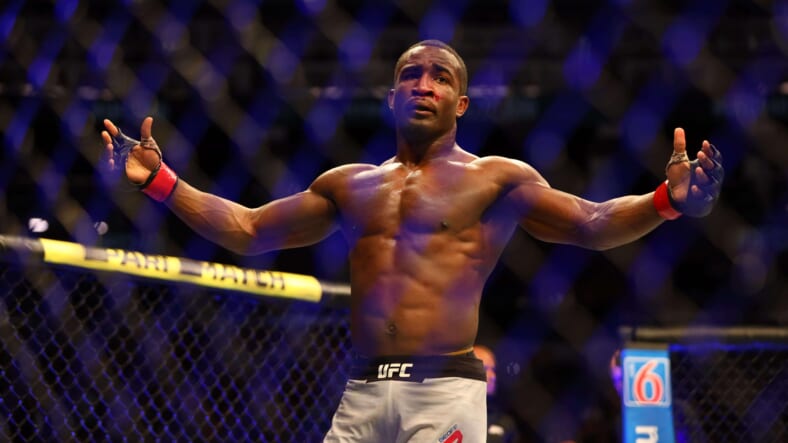 In the co-main event of UFC Vegas 59, we saw a highly anticipated matchup in the welterweight division. Top contenders battled it out as Vicente Luque (21-8-1) took on “Handz of Steel” Geoff Neal (14-4).

A couple of years ago, you would think a matchup between Neal and Luque would be a title eliminator. While there’s still a ton of hype on this matchup, the stakes aren’t quite as high. Vicente Luque is coming off of a loss for the first time since 2019.

Luque had won four straight all by finish before headlining a UFC Fight Night against Belal Muhammad. Luque had knocked out Muhammad in their first fight, but Muhammad’s wrestling was too much in the second fight.

Unlike Luque, Geoff Neal is coming off of a win. Neal defeated Santiago Ponzinibbio by split decision which snapped a two-fight losing streak. That losing streak came on the heels of Neal winning his first five fights in the UFC.

The UFC Vegas 59 welterweight contest kicked off with no touch of the gloves. Luque opens with pressure and Neal looks like he’s trying to gauge the range. Big low kick from Luque and Neal explodes with a couple of counter kicks.

Nice left straight lands for Neal and Luque continues to move forward. Nice combinations from both men in the pocket. Luque upping the pressure here but Neal stops the advance with a big leg kick and a left straight.

Big leg kick from Luque. Huge left hand from Neal wobbles Luque badly. Neal is all over him and he’s getting a little wild. Quick check hook from Luque backs Neal up and allows Luque to regain his composure.

Body kick from Luque and a nice 1-2 behind it. Lots of pressure from Luque here who seems fully recovered. Another huge left straight from Neal and Luque’s nose looks busted. Luque moves forward and throws a combination.

Another huge left from Neal hurts Luque badly. Luque backs up to the fence but Neal is being more patient this time. Another left hand sends Luque to the mat. Neal tries throwing a few shots but lets Luque back up. Right jab and a left straight from Neal. The round ends and it’s a huge one for Neal at UFC Vegas 59.

Entering the second at UFC Vegas 59 and Luque barely made it out of the first. Second round opens with a body kick from Luque. Low kick from Luque and it’s answered by Neal. Double jab from Neal lands.

Two nice left hands from Neal land. Body kick from Luque and he’s definitely trying to up the volume with his kicks here in the second. Another body kick lands. Head kick attempt from Luque. Luque really firing more than Neal here in the first two minutes.

Huge takedown from Neal but Luque bounces right back up. Neal leaning on him in the clinch but Luque lands a nice elbow. A little separation leads to a nice combo from Neal. Now it’s Neal who is upping the pressure.

Three straight vicious hooks to the body from Luque. Now a low kick from Luque. The round comes to a close and it’s Luque’s round in my opinion. It’s even after two at UFC Vegas 59.

Entering the final round at UFC Vegas 59 and whoever wins this round will win the fight in my opinion. They touch gloves and here we go. Luque goes right back on the pressure to start the final round. Two straight kicks from Luque.

Neal tries throwing a combo but nothing lands. Another clean kick lands for Luque. Neal pops Luque’s head back with a left straight. However, his shots are few and far between right now. Just as I type that, another stiff left from Neal.

Here comes Geoff Neal and he lands another big left hand. Massive 1-2 from Neal and Luque is hurt badly. Neal is all over him here and Luque is leaning against the fence. Neal lands about ten straight uppercuts but Luque is still standing.

The ref is getting close to stopping this. Another huge left straight sends Luque crashing to the mat. Huge win for Geoff Neal at UFC Vegas 59.