Despite the end, Frankie Edgar will forever be a UFC legend 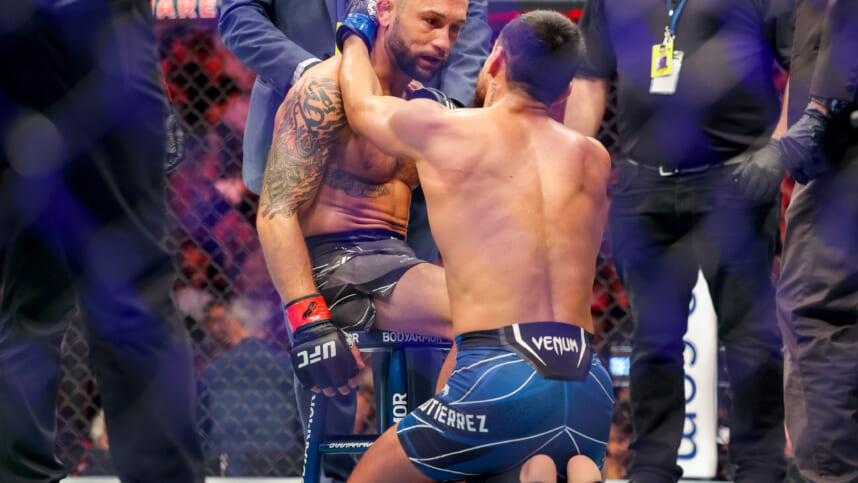 This past weekend at UFC 281, we saw the end of a legendary career. Former lightweight champion and featherweight title challenger Frankie Edgar (24-11-1) made the walk for the final time. He had a daunting task in his final fight taking on rising contender Chris Gutierrez (19-3-2).

This was a really tough matchup for Edgar in his final fight. Gutierrez is known for his slick striking and was more motivated than ever given the massive stage and opportunity. It was evident from the opening seconds that Edgar was going to have trouble.

Gutierrez looked great with his footwork and his sniper-like striking from the outside. Edgar was getting picked apart. However, in true Frankie Edgar fashion, the former champion kept pressing forward. And then, suddenly the end came.

Edgar pushed forward with Gutierrez along the fence. Gutierrez launched with a perfectly timed knee right up the middle to Edgar’s chin. Immediately, the former champion was out cold. The second time in three fights that Edgar has been put out by a perfectly timed flying knee.

It was hard to watch as the legend was placed on the stool after the knockout loss especially knowing that his wife and kids were in the front row watching. It was a brutal end of a spectacular career, but it was just another reminder of how brutal and cruel this sport can be.

I’ve spent some time thinking of Edgar’s UFC career. Without a doubt, he’s a Hall of Famer. That being said, he is also one of the more miraculous stories in UFC history. Frankie Edgar ended his career at 135 pounds. He looked small in there compared to Chris Gutierrez.

Edgar was the UFC’s lightweight champion. He was taking on much bigger fighters because lightweight was the smallest he could be inside the octagon. Edgar defeated BJ Penn twice when Penn was in his prime on top of the world. Edgar defeated and broke Gray Maynard in their fights.

I wish the UFC would have given him a better final matchup than a sniper like Chris Gutierrez. That said, fighting a daunting opponent is the perfect way to encapsulate Frankie Edgar. Who knows how great his legacy could have been had he fought at 135 his entire career. Nevertheless, he goes down as a legend and what makes him special is the fact that he always fought up no matter who the opponent was.