After his tough loss at UFC Vegas 63, what’s next for Calvin Kattar? 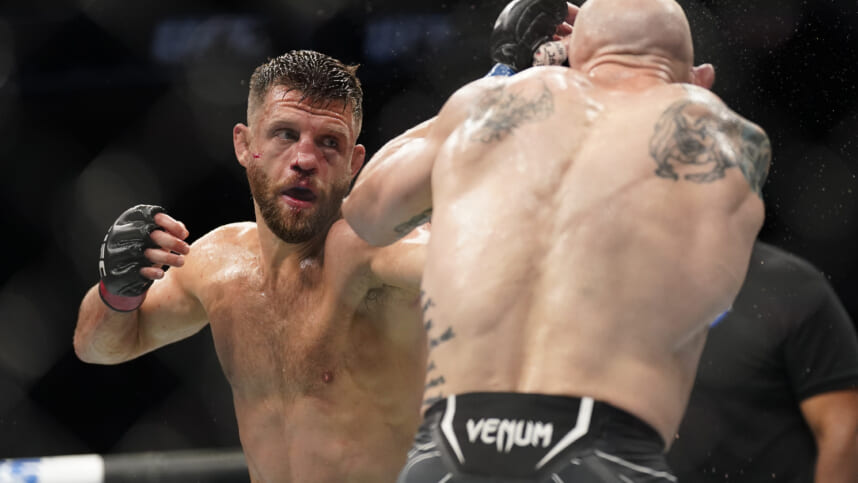 This past Saturday night in the headliner of UFC Vegas 63, we saw a pivotal battle between two men ranked in the top six of the featherweight division. Calvin Kattar (23-7) was looking to get back on track as he took on the surging Arnold Allen (19-1).

In looking at this fight, there were a number of advantages for both men. From a power and overall skillset standpoint, you had to favor Allen. However, in pure boxing throwing at distance, I liked Calvin Kattar. Going into the fight, I figured we’d see a lot of boxing.

For that reason, I leaned ever so slightly towards Kattar. When the fight started, both men were doing a good job of landing shots. However, the more impactful shots were coming from Arnold Allen including a few big flurries.

Later in the round, Kattar went for a flying knee. When he landed, he immediately fell to the ground holding his knee. The round ended and Kattar limped back to his corner. He told the doctor that he could continue and the second round started.

Immediately, Allen kicked the opposite leg of Kattar and he crumbled causing the fight to end. Kattar suffered his second straight defeat at UFC Vegas 62.

This one is really tough because I don’t think it was a clear win for Arnold Allen. Before the knee injury, I would say that he was winning the round. However, there was a long ways to go and as we saw in the Giga Chikadze fight, Kattar can go hard for five rounds. I was expecting a warn.

Nevertheless, it’s a second straight tough loss for Kattar after he lost a very close split decision to Josh Emmett back in June. So, whenever he is healthy and ready to go, what should the UFC do with Kattar next?

There are a couple of options out there, but there’s one I really like. I actually like Kattar taking on Sodiq Yusuff next. Yusuff is on a winning streak and to me, he’s ready for top ten competition. Kattar is going to need to fight someone near the back end of the top ten next after going 1-3 in his last four.

It’s a perfect match for both men and would tell us a lot about both. A lot will hinge on the health of Kattar, but if they can make this fight, I really like the matchup.