After falling short at UFC 280, what’s next for TJ Dillashaw? 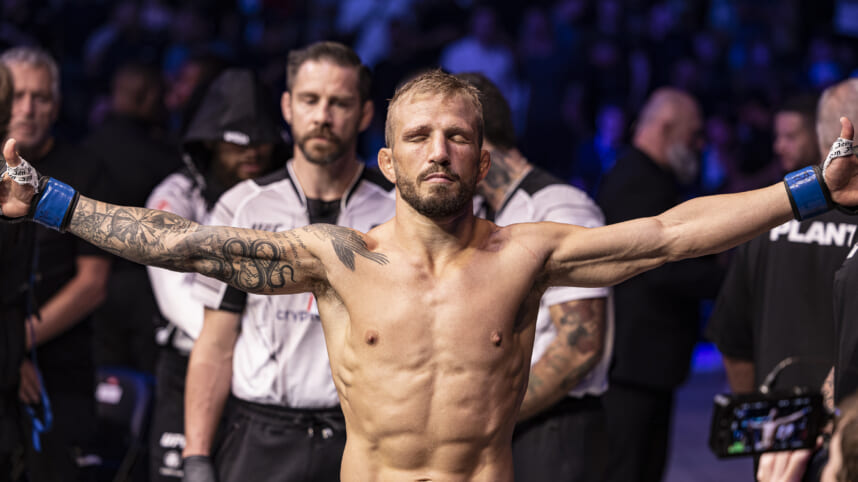 This past Saturday night in the co-main event of UFC 280, the bantamweight title was on the line. TJ Dillashaw (17-5) was trying to become the first man to become a three-time bantamweight champion when he met Aljamain Sterling (22-3).

Going into the fight, I thought that Dillashaw had an excellent chance if we saw a prime TJ Dillashaw. A Dillashaw that was extremely light on his feet, could scramble to get back to his feet, and hit with crisp combinations. What nobody knew is that Dillashaw was dealing with a major shoulder injury.

Apparently, Dillashaw really injured his shoulder back in April. During training camp, his shoulder would constantly pop out of place. Training partners said he couldn’t even lift his arm at times. However, not wanting to lose his title shot, Dillashaw stayed quiet about it much to the dismay of the UFC.

Dillashaw was hoping for a striking battle where he wouldn’t have to grapple. Well, in the first round, Sterling took him down and in a scramble, his shoulder popped out. He was basically a one-armed fighter. He somehow managed to survive the first round. He wasn’t so lucky in the second round and went on to lose by TKO.

I get Dillashaw’s logic. If he was to pull out of the fight with the shoulder injury, someone else would’ve gotten his spot and there’s no telling when he’d get another shot. In fact, he likely would have had to fight another time before getting a title shot again.

That being said, he went in there with the current top dog with one arm essentially. Dana White wasn’t thrilled to hear about this because it really damaged the fight overall. It wasn’t competitive because Dillashaw couldn’t even use one arm.

What’s next for Dillashaw is recovery. He needs to get back to being 100% before he fights next. Once he is ready to return, what should be next? I personally would love to see the rematch between him and Dominick Cruz. Two legends who are two of the best of all time. Never