Aljamain Sterling gets the finish against TJ Dillashaw at UFC 280 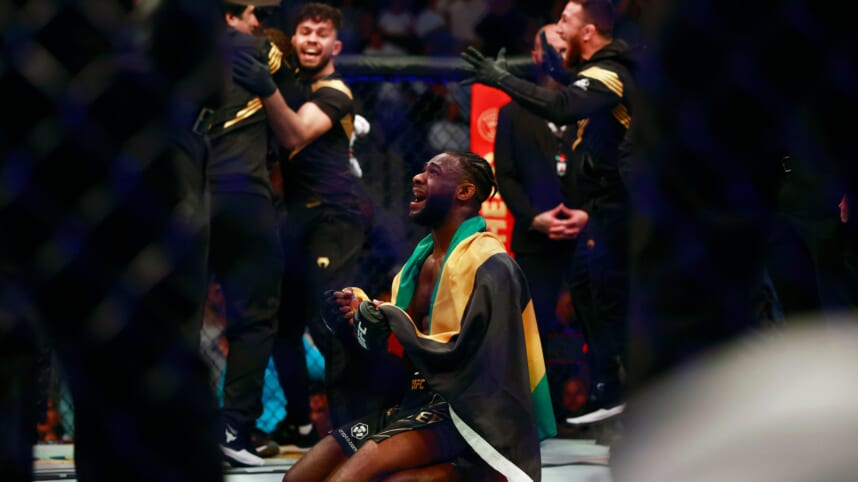 In the co-main event of UFC 280, we saw a battle for the bantamweight championship. Undisputed champion Aljamain Sterling (21-3) was looking to defend his title for the second time when he took on former champion TJ Dillashaw (17-4).

It’s been a long road back for TJ Dillashaw. A few years ago, Dillashaw was stripped of his bantamweight championship after testing positive for EPO in his attempt to win the flyweight title. He served a two-year suspension and came back successfully last year.

Tonight, he was looking to win back the title he never lost inside the octagon. To do that, he was going to need to defeat “The Funk Master”. Aljamain Sterling’s title reign started out with a lot of controversy. He challenged Petr Yan for the title and was clearly losing the fight.

Then, Yan hit him with an illegal knee and Sterling was awarded the title by DQ. However, Sterling righted everything when they had their rematch and he won by decision.

The UFC 280 co-main event kicked off with a touch of the gloves and here we go. Sterling immediately takes the center and starts trying to work some strikes at range. Dillashaw lands a kick, but Sterling catches it and takes Dillashaw down.

Dillashaw looks like he got hurt in the takedown exchange. Sterling slips into the mount and now Sterling is going to work with big shots. Dillashaw can’t really defend and he rolls to his back. Sterling is looking for a choke here.

Dillashaw is taking a lot of punishment here. He forces a scramble, but Sterling stays right on him. Dillashaw gives up his back again and Sterling is staying patient. I’m not sure that Sterling knows Dillashaw is hurt. If he did, I think he’d press even more.

Dillashaw trying to turn into Aljo here. One minute left for Dillashaw to survive. Dillashaw is really gutting it out here. Somehow he breaks away. The round comes to a close with another Sterling takedown. Dominant first at UFC 280 for Sterling.

Entering the second and it looks like Dillashaw’s shoulder got popped back into place and here we go at UFC 280. Dillashaw takes the center and Sterling starts targeting the shoulder with kicks. Nice right hand for Dillashaw.

Takedown from Sterling and he settles into half guard. Dillashaw is going to half a very difficult time trying to break away with virtually nothing in his left arm. He’s trying to defend, but Sterling is all over him here in the second round.

Dillashaw is trying to get back to his feet, but can’t get much going. Sterling goes for a choke, but Dillashaw defends well. Dillashaw’s shoulder is out again after he gets out of the choke and back to his feet. Sterling immediately takes him back down.

Mount for Sterling and he’s really starting to damage here. Dillashaw can’t defend at all here. The fight gets called and Sterling retains at UFC 280.