After falling at UFC 278, have we seen the end of Jose Aldo? 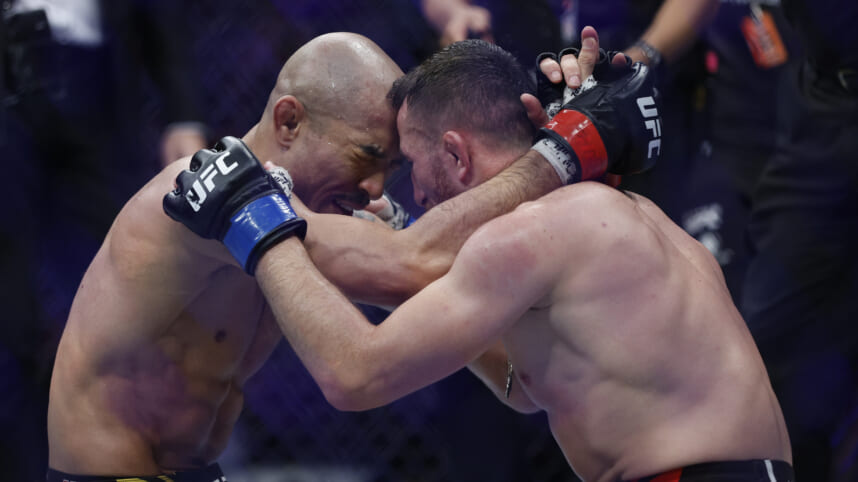 This past Saturday on the main card of UFC 278, we saw a pivotal matchup in the bantamweight division. Former featherweight champion Jose Aldo (31-8) was looking to continue his climb up the 135 ladder as he took on Merab Dvalishvili (15-4).

There are some fights where the fighters will surprise you with their game plans. You think they’ll come out one way and then they do something completely out of left field. That was not the case in this fight. This fight went exactly how everyone thought it would in terms of game plans.

From the opening seconds, Dvalishvili was relentless with his pressure in trying to take Jose Aldo down. Dvalishvili never stopped trying for the takedowns and he pushed hard for 15 minutes. Aldo’s takedown defense was just as legendary as it’s always been.

Dvalishvili holds the record for most takedowns in a single bantamweight fight. Well, he wasn’t able to get Jose Aldo down once. That being said, Aldo was incredibly tentative all night because of the takedown threat. In addition, the former UFC champion started getting tired with the takedown defense.

In the end, it was a very lackluster fight to watch that had the fans booing. The final bell sounded and all three judges gave the fight to Merab Dvalishvili.

Is this the end of Aldo in the UFC?

The loss snapped Aldo’s three-fight winning streak that saw him defeat Chito Vera, Pedro Munhoz, and Rob Font. In those three fights, he proved to everyone that he’s still one of the very best fighters in the world. However, could this one loss be the end of his career inside the octagon?

Merab Dvalishvili told Ariel Helwani on the MMA Hour that Aldo told him he was done in the cage. Aldo apparently referenced the fact that this was his last run at the title and with the loss, he wouldn’t continue. So was Aldo’s last fight at UFC 278?

I’m going to say no for a couple of reasons. For starters, I find it hard to believe Aldo would walk away after this latest winning streak and then losing like that. I still think he has something left in the tank and I don’t think he’ll walk away on that performance.

The big reason why I don’t think he’s done is the UFC is returning to Brazil early next year. Jose Aldo is the “King of Rio” and I can’t see them going to Brazil without him on the card. Whether he’s done competing for the title or not, he’s not going to miss out on that card. This isn’t the last we’ve seen of Jose Aldo.